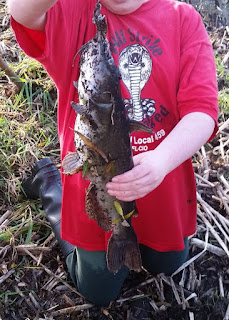 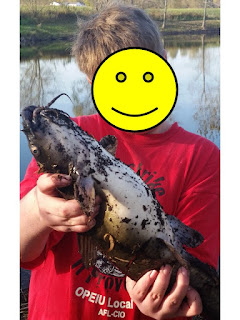 The kid caught a 22" catfish with a bigger beer-belly than I have.

He helped Sprite move the cattle back to her pasture and she gave him (us) permission to fish in her pond as thanks for the help. Privileges must be earned.

He insists it weighed eight-pounds. So, of course that is what it weighed...eight pounds.

He did not want his face in the pictures which fits in perfectly with the Eaton Rapids Joe editorial standards regarding minors and images on the blog.

The secret bait was a six-inch strip of chicken skin that had marinated overnight in soy sauce.

We released the fish back into Sprite's pond.

That was one HAPPY kid.