Cletus and Zeke on Lake Leelanau 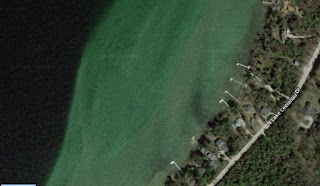 Cletus and Zeke were pulling docks out of Lake Leelanau for the winter.

They were working on the east side of the lake and it was late October.

The breezes off Lake Michigan that made the area a summer-time playground for Chicago area millionaires was knifingly cold in October and the work was brutal. They left Cletus's truck running and spent half of their time in it warming up.

As bad as it was for the guys on the shore, it was ten times as brutal for the guy who had to wade into the water and suction the sand away from the feet of the dock. They took turns doing it.

During one of the sessions in the truck, Cletus said, "If I ever find out who put these docks in I am going to kick his ass! Even a moron would know to grease the bolts so they don't lock up with rust."

They were working with a kid of about twenty who had dropped out of Northwest Michigan Community college. He started to lecture Cletus. "It wasn't his fault. He is just a common worker like us. You should be blaming 'The Man'."

"What the fuck are you talking about?" Zeke asked.

"Class warfare. The Man is just keeping us down." the kid remonstrated.

Cletus looked up and down the shoreline. "How many of these docks are owned by poor people?" Cletus asked, rhetorically.

The kid shook his head. "None of them, you idiot. Beach front property on the east side of the lake runs $20,000 per foot of beach."

"That's what I am talking about." Cletus said. "I never had a poor person give me a decent paycheck for a week's worth of work."

"Look," Cletus tried one more time, "we are getting paid twice minimum wage and we are spending more than half the time in the truck drinking coffee, listening to the radio while you smoke weed. No way in hell would a poor man tolerate paying $40 an hour for the time we are actually working."