About those pictures in the van window 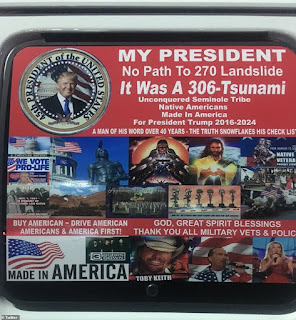 Aesop over at Raconteur's Report recently posted what he believed to be supporting evidence that the inept bomber was a Democratic false flag event.

My first impression was that the supporting evidence was thin, attributable to what could have been a mistaken identity or the equivalent of a typo.

One of the piece of evidence he cited involved the graphics in the van windows. I reserved judgement until higher quality images became available on the internet.

There is no evidence these images were posters that were professionally produced.

And the quality is so far beyond what the typical, ham-handed human can produce that the story that he cut them out of magazines with Kindergarten scissors and scotch taped them into the windows himself...well, that story is a non-starter.

I used to install emblems on the back of automobiles. It is duecedly difficult to align rectangular shapes on curved surfaces. The bigger they are the more likely they are to visually walk out-of-square.

So give Aesop at least three points here: