The high point of the week

I got to spend a couple of hours with a fellow, mid-Michigan blogger. 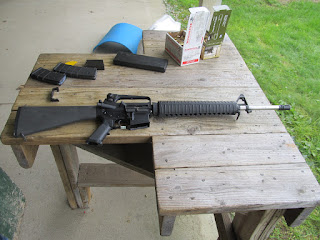 I threw myself on his mercy. I told him I knew nothing about AR platform weapons except they were black and bullets came out of the pointy end. I also told him that I was writing a story that involves AR pattern rifles and I didn't want to piss off my readers by saying things that were stupid.

He agreed to the Sisyphean task of trying to make me smarter.

His trust in me was boundless. He let me shoot his daughter's rifle.

He patiently walked me through the purpose of the various doo-dads that festoon the weapon.

We did not even burn through a box of ammo. I fired three at the fifty yard line to see if I was on the paper. The six-O'clock hold was fine for elevation but was four inches to the right at fifty yards.

Not wanting to mess around with Providentia's daughter's sight settings, the remaining shots were fired using Kentucky windage. 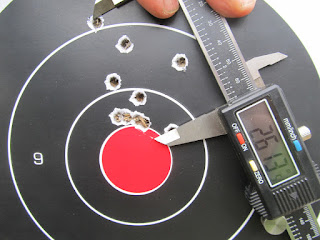 This is a ten shot group fired at fifty yards, prone, over a bag of clothing from Goodwill. The rifle is obviously capable of much better accuracy than I am. Perhaps with time and more of Providentia's coaching I will someday be able to put ten in the the target as tightly as the four that are touching.

The shots were probably fired about two seconds apart so it mimicked what I might do while hunting.

For readers who do even less shooting than I do, 2.5" groups at fifty yards or 5" groups at 100 yards from honest "field positions" at real hunting-cadences will kill truckloads of game. No, it will not snipe deer a quarter-mile away, but it will be sufficient for 80% or more of the game animals you will see in eastern forests, brushlands or highway cloverleafs.

Total rounds fired in the 80 minutes of coaching: 13
That may not sound like many but I learned something with every shot and there were still a few rounds left in the box for Providentia to take home.
Posted by Eaton Rapids Joe at 6:38 PM