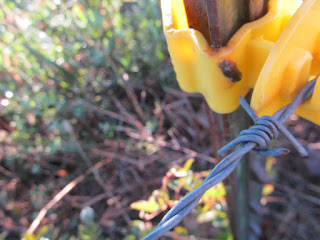 The electric fence was snapping this morning indicating an air-gap jump.

It helped explain Herc's seemingly irrational behavior last night. The line for the dog run is on the pasture side of the house. I suspect it was snapping last night and I did not notice because of the background noises.

Herc certainly noticed. He wanted nothing to do with going out on that line and doing his business. Earlier this fall he had gotten "whacked" by the fence while I was fiddling around in the pasture snipping away vegetation that was leaning on the wire.

The short was easy to find as it was snapping more than half the pulses.

The root cause was a slug that had crawled up the post and partially bridged between the wire and the post.

I tried to fix it by snipping off the barb. For whatever reason, the insulation on the handles of the tin snips was not up to the task and the "poke" convinced me that there was a less painful way to temporarily fix the problem.

Attempts to dislodge the slug were unsuccessful. He was cooked in place. 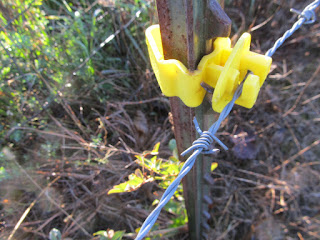 I rocked the post over to the right so the barb was not as close to the post. That will do for now.

Posted by Eaton Rapids Joe at 9:25 AM