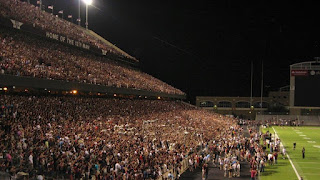 During an average, home-game weekend, University of Texas manages 101,000 of the same.

And you are telling me that between those two fine universities and a couple thousand cases of 17% OC spray that the United States cannot control the behavior, section, row and seat number of a few thousand, malnourished Central Americans.