It is the economy, stupid

There are two competing narratives regarding the Honduran caravan heading toward the US.

One is that they are families fleeing gang violence.

The other is that the migrants are seeking economic opportunity.

The gang violence narrative is alway supported with pictures of families with women and children filling the frame.

More candid shots of the crowd support the economic narrative.

The crowd is overwhelmingly men in the 20-to-30 age group.

Honduras has long been heavily unionized. 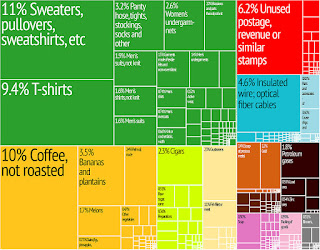 Perhaps it is notable that most of the Honduran private economy is devoted to textiles, an industry that is typically dominated by women workers and is usually considered "low value added".

Look no further than Honduras to see the pinnacle of Progressive ideals: Unions, large public sector, doubling down of investment in industries awash in global overcapacity and industry dominated by women workers. Do you like what you see?