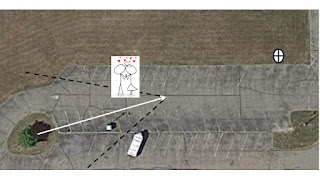 Suppose, just for purposes of entertainment, a hunter was beneath the tree on the left side of the picture shown above. Suppose he is shooting at a particularly delicious looking woodchuck on the right side of the picture, depicted by a white ellipse with cross-hairs sketched on it.

Furthermore, suppose there is a couple nearby who is otherwise distracted and some blunt obstacles near the path of the bullet.

Knowing that the sound of gunshots is distracting and sometimes generates more attention than desired, the hunter has a suppressor mounted on his weapon.

The bullet will generate a sonic boom if it is moving faster than the speed of sound which is about 1200 feet-per-second. That boom is shaped like a Christmas tree with the point of the tree at the bullet and the widest branches closer to the shooter. The horizontal envelope of the sonic boom for a bullet traveling at about 1.5X the speed of sound is depicted with a dotted, black line.

When the boom hits the couple, their first assessment of the source of that noise will be perpendicular to the propagating wave-front. That is, way behind the actual position of the bullet but well in front of the hunter. That apparent source is depicted by the green arrow.

Experience from poachers suggests that observers are very rarely able to identify the position of the first shot. Like on the sporting field, the first infraction only gets people's attention. It is the second infraction that gets flagged.

The second, well defined wave-front that hits the couple is the echo off of blunt objects on the opposite side of the bullet's path. The apparent source is depicted by the green arrow. In this case, it is worth noting that the two green arrows are in nearly the same direction and the observers might mistake the second crack as "fine-tuning" of the initial estimate.