The Captain gave me an assignment

This is a short video clip of about 20 seconds.


The Captain gave me an assignment.

He wants to be able to look out his picture window on a cold and blustery winter night and be able to tell if his electric fence is "hot".

In studying air-gap voltage protectors I learned that the standard 48" fluorescent light tube has an "instant start" voltage of about 600V. That is, apply 600V across the two ends and it will create light.

It took longer to find a fluorescent light tube than it took to wire one end to the electric fence and to twist the other end so it was grounded to a woven wire fence behind it.

The installation was not perfect. It is not bright enough to see in the day. It drags down the line voltage more than I wanted. Perhaps worst of all, I started getting complaints from Mrs ERJ and the Captain's wife. Mrs ERJ said it felt like she was living next to an airport with the night time strobing. The Captain's wife was afraid that it was bright enough to give her a migraine.

Except for the inability to see the light in the day, all of the other issue can be fixed by adding an impedance in-line with the fluorescent tube. As the designer, I had two choices, I could add a resistor or I could add a choke, also called an inductance.

I opted for the resistance because I thought of a sneaky way to calculate the proper amount of resistance, a way that involved very little calculation.

Background
The electric fence is little more than an energized circuit. The amount of power that is dumped to each of the legs-to-ground is proportional to 1/R, or one over the resistance.

The problem with the fluorescent tube with no throttling is that it has a significantly lower resistance than, say, a cow so more of the power will go to illuminating the lamp than to disciplining the cow.

Cows are not known for being very smart, but they are too smart to do that.

The next step is to logically proceed to the question, "What animal would be superior to a cow as an in-line resistance?"  The answer was a six foot long snake. The snake is a lower wire gauge than the cow and is slightly longer. Therefore it would produce a higher resistance but still be about the same order of magnitude.

"If I can't find a reindeer, I will make one instead" 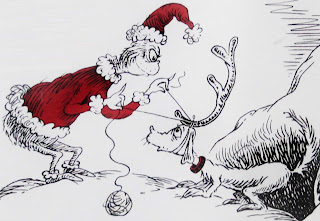 Due to a shortage of 6' long Blue Racers and Rat Snakes in my neighborhood I was forced to find a substitute.


The snake was then force-fed Gatorade, a fine source of electrolytes, to simulate the conductivity of reptilian flesh. Electrolytes: Its what plants crave.


This is a very short video clip of less than 10 seconds showing the throttled light tube.

So, did I nail it?
Well, no I didn't. I throttled it back too much. But that is easy to fix. I simply pull some of the hose through the tie-downs and cut off a chunk. Then reinsert the lead. That is why you want to start with a LONG snake, so you can tune it. 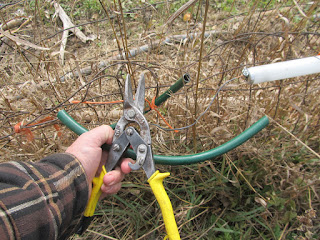 In retrospect, it would have been even smarter to leave the ground wire long.  Very long. Then I could have simply fed more-and-more of the ground wire into the ersatz snake thereby shortening the path through the electrolyte and stopped when the light was Goldilocks perfect.  A couple turns of tape to secure the ground wire and then come back in the morning and measure the resistance with my multimeter.

Or...simply supplement the Gatorade with antifreeze and cap the ends with tape so rain does not dilute the potion.

For the record, the shorter snake measures somewhere between 2M ohms and 3M ohms and it is still a bit too much. If I were to try this with discretes, I would buy four of these resistors  for about $10 and figure out if my fence liked one, two, three or four of these in series to choke down the fluorescent light tube.

I would also add a reflector behind the light tube.
Posted by Eaton Rapids Joe at 8:15 PM