Some thoughts on fixed costs

Some folks would have titled this essay "The Automation Trap", but the roots of this dilemma involve more than "automation".  I will use apple orchards to provide concrete examples of what I am trying to communicate.  There will be at least two parts to this essay. 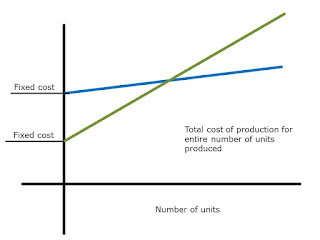 This is a curve you would see in your first year of economics.  Two production models are presented.  One production method, the green line, has lower fixed costs but higher per-unit variable costs.  The variable cost is seen in the steepness of the line.

The other production model, the blue line, has higher fixed costs but lower per-unit variable costs.

Fixed costs are the cash outlays a business must make before they can produce their first unit.  It might be an oven to bake pizzas.  It might be dies in a metal stamping plant.  It might be land and young apple trees.

One can obtain "cash" by borrowing money. 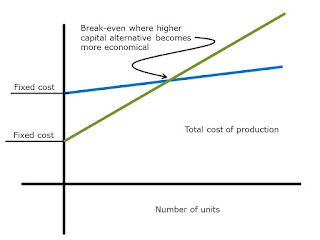 The point where the two lines cross is where the high-fixed-cost-low-variable-cost model (the blue line) becomes more economical than the green line.

Time value of money
Typically, an economics teacher will make a statement something like, "The low fixed cost model is preferred when markets for the product are uncertain or the cost of borrowing is high or uncertain.  The low variable cost model is preferred when markets are large (easily transported commodities, for instance) or borrowing money is cheap.

The cost of borrowing (interest rate) comes into play because you might be borrowing very large amounts of money and because it takes time to spend money.  More precisely, it takes time to design and construct tools or there are often waiting lists for equipment.

The economy can only afford to purchase X number of SUVs (or Y pounds of Fuji apples) per year.  What happens when the production capability is 125% of X or Y?

The producer is compelled to keep producing as long as the market price is above the variable cost of his production.  From an accounting standpoint, they are losing money because the price does not support the "true" cost of production...a cost which includes the carrying cost of the debt and replacement cost of tools.  They may be losing money but they would lose even more money if they stopped producing.

If the size of the market was known in advance, the parties would have chosen the optimum production model and life would be grand.  But they did not know the limits of the market.  Both over-invested.  They find themselves forced to make tough decisions.  Their "sunk costs" tends to function like an anchor with a short rope, limiting the universe of choices that they will consider.  The larger the debt, the shorter the rope.

The grower who can produce at twenty cents a pound can stay in business selling apples at twenty-one cents a pound and destroy his neighbor as long as the twenty cent producer is on good terms with the bank that holds his loan.