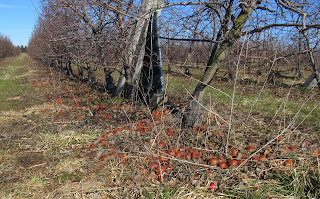 I first planted the orchard on our property about 1994.  Over the years it has suffered significant mortality.  One or two years ago I decided to "retool".  I removed grape vines.  I pulled fences.  I planted rootstock.  I started filling in the gaps.  The game plan is to have about 36 trees that are highly productive and very low maintenance.

Part of the fun of having a fruit orchard is agonizing over what species and cultivars (cultivated varieties) to plant.  That includes both rootstock and the top portions.

The current plan is to have:

The other part of the plan is to plant some quince trees between the existing trees which are spaced 15' apart...but that will be covered in a later post.

Today's adventure was to collect scionwood for the trees that will be grafted over to Enterprise.

Enterprise should be fairly winter hardy.  It is half McIntosh.

Enterprise is resistant to many common apples diseases.

Another cool thing about this cultivar is that it has scab resistance from multiple sources which makes it more difficult for the disease to evolve around the cultivar's defense.  Enterprise has the Vf gene but it also has three "minor" resistance genes from its Red Delicious grandparents.

The orchard where I collected this scionwood sells organic Enterprise, uses them in pies and blends them into cider.  It is not their most profitable variety but it is one of their more versatile ones.  The owner of the orchard characterized Enterprise as "Idared for Dummies".

So what is the downside?
It ripens so late that it is relatively tasteless and "starchy" immediately after it is picked in early October.  The upside is that it quite happily ripens in storage.  The same apple that was mediocre on October 15 is absolutely delicious by Thanksgiving and will make one of the best apple pies you ever wrapped your lips around.

Patience is a good thing.