Would YOU want to know the odds?

My brother was recently diagnosed with cancer.

Some folks think it is strange that he does not want to know "the odds".

I, however, think it is wise for many different reasons. 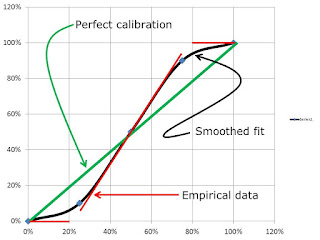 This is a "calibration" curve showing how most people process "odds" or "uncertainty".

The straight, green line that cuts across the graph diagonally is "perfect calibration."  That is not how folks intuitively process data, even ones that are highly trained in statistics.

The red, broken line more closely represents how people mentally "map" odds.  Most people are fairly well calibrated for 50:50 odds.  That is, the flip of a coin.

For all practical purposes that means that a patient who is told that their chances of survival are less than  20% will bend that information into certain doom.  They will lose the will to live.

But even that is misleading
To quote Gordon Dickson's Dorsai

For life and death are binary.  There is no such thing as being a little bit dead.

Even if your odds of survival are one-in-a-million, iff you are the one...then you are still 100% alive.  The clarity of hindsight informs us that "your" odds for survival were 100%, just like the odds of that ovum being fertilized with that spermatozoon were 100%...in hindsight.

As a final consideration, consider the odds of a misdiagnosis.  Surely those odds are higher than 1%.

Nurses must be protective of their own mental health.  Good nurses have an empathy bond with their patients.  "Knowing" that a patient might be dead in two months facilitates protective pre-grieving.  It also keeps the world orderly and sufficiently predictable to keep them from going bat-shit crazy.

That is where we are today.  I have a brother with cancer.  I have a sister who worked as a nurse on the oncology floor for 25 years.  My sister lost her daughter in 2010 so she knows the agony of losing a child...and it tears her up when mom and dad ask her questions.  I have another brother who is a radiologist.  Actually, I have it pretty easy.

Bonus link on calibration and the appropriateness of extreme confidence.