New Zealand had a problem.

New Zealand has few competitive advantages in the global economy.  They do not have massive ore deposits, or extensive fossil fuel deposits, or awesome deep-water bays for shipping.  They do not have millions of engineering graduates.  They were hampered by their position in the most active seismic region of the Pacific Rim and rolling terrain.  And they were also hampered by having  population with expectations of First World living standards. 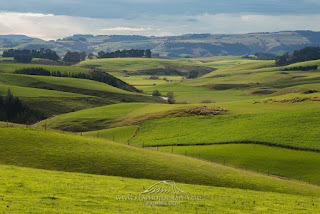 New Zealand does have fertile soil due to all of that seismic activity.  They also have the reliable rains and temperate climate one associates with medium sized islands in the "Roaring 40s" (latitude).

So the commodity most suited to New Zealand's strengths and weaknesses was the production of dairy products.  Unfortunately, most Asians do not have a tradition of consuming dairy products.  And the one nation that did, India, was not overly endowed with hard currency.  Shipping milk to the major markets, Europe and the US, was hampered by the fact that milk is extremely perishable and heavy.

The solution was to become very good at producing "manufactured milk products" like butter, cheese and dried milk.

In the US, producers do not make money on Grade B milk, that is, the milk that is processed into dairy products.  There is always an oversupply of Grade B milk and the prices are always too darned low.  Dairies get knocked back to Grade B milk when their quality slips.  The dairy producer has to keep milking the cows.  He has no option in that regard because it is a health issue for the cows.  US producers gladly sell the Grade B milk for some money rather than dump it on the ground. 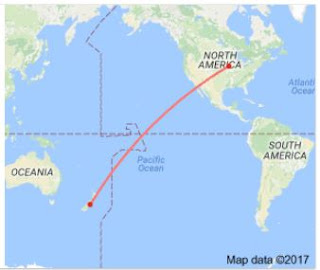 Let me recap:  New Zealand was not well suited for the production of grain but is well suited to raise dairy cattle.  The US business model involved feeding large amounts of grain to cattle, grain that New Zealand would have to buy in the US, transport the grain 8200 miles, feed the cattle, extract the milk, "manufacture" the dairy products and then ship back to the US or Europe.  And somehow make money on a product that local, US producers were losing their ass on.

The path to success was extremely Darwinian
Some of the problems solved themselves.  Feeding the cattle imported grain was an obvious non-starter.  The only path to profitability was to feed the cattle what wanted to grow in New Zealand:  Perennial Ryegrass and White Clover.

Other problems floated to the surface when the bean-counters finished their preliminary analysis.  New Zealand milk producers had to put milk in the tank at 1/3-to-1/4 the cost of US producers.  That was not going to happen relying on cute life-hacks or infinitesimally small efficiency gains.  It demanded a ruthless re-engineering of the entire business process.  No stone could be left unturned, no toad could remain unkissed.

Milking parlors
A major part of the path-to-profit was to rethink milking parlors and to make them more labor efficient.  Labor is money.  The other aspect is that "labor" was used to fix "situations" when the cows were stressed.

Stressed cows give less milk.  One of the keys was going to be figuring out ways to get cows to do what the dairyman wanted them to do without stressing them....without relying on force.

How successful were they? 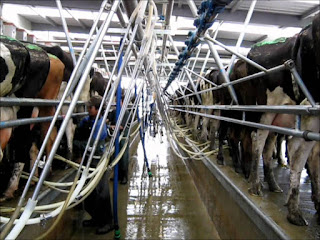 How did they do it?
They realized that the only things the human could uniquely do was to put the milking machine on the cow and to clean up afterward.

They looked at all of the other things milkers were doing, i.e. spending time on.  Much of it involved moving cows.

People started asking, "Why do we have to drive them into the barn?  They want to get milked.  A full udder is painful."

One of the answers was that barns are dark.  Cows are prey.  Predators den in caves.  Caves are dark.  Therefore, dark places are not safe places for cows.  The barns were opened up and the walls were removed from the  entrance and exit.  The cows could see light and landscape in the direction they were supposed to move.  It became more like walking through a valley than entering a cave.

Another answer is that cows don't deal well with corners.  Imagine a semi truck trapped in an employee parking lot.  It has a bunch of traffic stack-up behind it so it cannot back up.  It has a bunch of very sharp maneuvers to execute.  The driver stresses.  The driver locks-up.  Same thing with cows.  The solution was to never require that they turn.  Straight through, baby!

Incentives
Cows have a significant control over how quickly the let their milk down.  They can help you or they can fight you.

Realizing this, US producers reward cows after milking with grain.  Typically the operator would hook up the milking machines, leave the pit and get a five gallon bucket of corn.  He would put it in a feed trough over to the side and then go back to the pit.  When the last cow finished giving milk he would release all of the cows from the milking machines and the cows would saunter over to eat their grain.  That is a human or operator centered process.

The problem is that cows are much like the office gossip.  They are not very bright and they seem to waste what little intelligence they have on negative thoughts about their cow-workers.  "Oh hell.  I am next to Blossom, that iron-teated, splay-footed cow always take for-evah to drop her milk.  I'll show that old bitch.  I will go even slower!"  (Note:  Cows are notoriously potty-mouthed.)

Contrast that to New Zealand.

The cows get plugged in.  The operator starts from whichever end has the high-producing cows.  More milk takes longer to extract and he wants them to finish in a near-deadheat.  He pulls a cord that drops five pounds of corn through a thin-walled metal "stove pipe" into a tin lined feed trough.  The corn rattles coming down the stove pipe.  It rattles when it hits the bottom of the feed trough.  Grain dust rises into the air and the ventilation pattern carries it over to the cattle.  The ventilation pattern is intentionally designed to do that.  Ryegrass and clover are salad.  Grain is the equivalent of Snickers bars.


Rudimentary pneumatic logic (in the beginning) was programmed to release each cow as she finished milking.  There was only enough corn for the first cow!  Be damned if Blossom gets it.

After leaving the center of the milking parlor they are free to go to a fresh slice of paddock.  Fresh paddock is highly valued by cows.  Unlike the paddock they just left, the fresh paddock does not have cow poop tracked all over it.  Even the girls who did not get any grain are eager to tear into the fresh paddock.

Speaking of poop...
US dairymen brag about how many cows they milk per hour.  There is a strong temptation to not keep book on the labor consumed by incidental tasks; opening and closing gates, cleaning up the poop and so on.

In New Zealand, efficiency is not about bragging, it is about economic survival.  Leaving out "real" costs leads to compromised information, poorly informed decisions and then to bankruptcy. 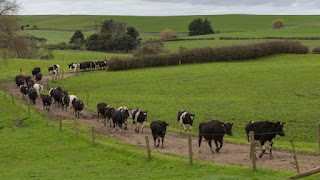 Consider poop.  It takes time to clean up after cows poop in the milking parlor.

In New Zealand the cows are moved from the paddock directly to the milking parlor via the opening of gates.  Most of the cows are quietly resting and chewing their cud as they wait for the gate to open.    Cows poop-and-pee when they stand up.

Then they poop-and-pee on the walk to the barn.

Some barns even had a shallow "pond" the cows walked through just before they entered the barn because stockmen noticed that cows ALWAYS poop-and-pee when they waded into streams to drink.  By the time they get to the milking machine they are pretty much all pooped and peed out.

But if they are not...the operator has a hose that attached to a ceiling mounted pivot.  The hose is not long enough to touch the floor.  That is because somebody noticed that the typical wall-mounted spigot left a loop of hose on the floor that trapped poopy-soupy water and the operator had to spray the floor down twice.

So why can't the US close the gap?
The biggest reason US producers have been unable to close the gap is due to the anchoring effects of sunk costs.

The New Zealand technology does not lend itself to cherry-picking.  It only takes one knot in the hose to choke the flow.