The original Carrington event was caused by a solar flare that hit the earth on September 1 and 2, 1859.

"Northern Lights" were seen as far south as Cuba in the Caribbean.

Telegraph operators were shocked by their equipment.  Paper caught on fire due to sparks.

Much has been written about the impact a similar event would have on our much more intensively "wired" modern world.  It would not be good.  Integrated circuits are exquisitely sensitive to voltage surges.

How long do Carrington events last?
One detail that intrigued me was the possibility of the event only hitting one hemisphere.  Is it possible that the event would burn out in less than twelve hours and only take one hemisphere, or portions of one hemisphere, back to the stone age?

There is actually some pretty good data available HERE from the July 2012 event that narrowly missed the earth.  Even though it missed the earth it came close enough that satellites orbiting the earth were able to collect some very high quality data. 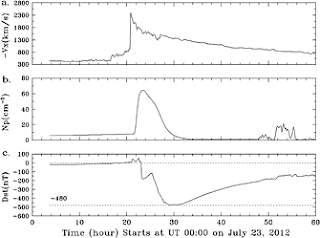 Unfortunately, I do not have the background to determine if the most applicable chart is the middle one (ten hours of risk) or the bottom one (25 hours of elevated risk).  Maybe one of my readers (Old NFO, Remus, help me out here, guys) can chime in.

Another question is, suppose we had advance knowledge.  Suppose we saw Europe being hammered and knew that our turn in the barrel would occur in five hours.  What could we do?  Do we pull all of our breakers and unplug all of our devices?  Do we put the most fragile equipment in steel garbage cans or refrigerators?

The consequences of latitude
One of the more recent EMP events hit Quebec's power grid in March of 1989.

It may not be a coincidence that the event happened in Canada.  The lower latitudes are more protected from solar winds than higher latitudes.  That is why Aurora Borealis (Northern Lights) are not visible in regions closer to the Equator.

Stuff to think about.
Posted by Eaton Rapids Joe at 8:53 PM