I was hanging out in a hospital lobby waiting for a friend to have some procedures performed when I noticed a young lady fiddling with a rolling stand.  It had many interesting doo-dads hanging from it.

I am not adverse to talking with attractive women.  I am now of an age where they see me as a "safe" grandfatherly figure.  I have no problem with that.

The young lady was a sales rep doing her final prep before going in to sell her company's device to the powers-that-be.

I was curious about the device and asked a few question. 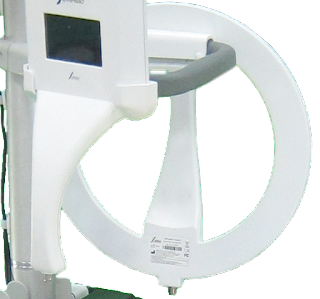 The donut with the handle-strap across the middle is a Radio Frequency Identification Reader.

Every surgical sponge is tagged with an RFID chip and is scanned just before it is used.  Every sponge is also passed in front of the reader as it is pulled out and the logic in the computer at the bottom of the unit keeps "book".  As a final quality check, the donut can be passed over the patient and it identifies any tagged equipment that was not removed from the patient.  The logical time to do this is before the patient is stitched up and shipped to recovery.

The intention is to put RFID chips on every device or equipment that MIGHT be inadvertently left in the patient: sponges (the beta sled...currently available), hemostats, scalpels...  The only device that is too small to put an RFID chip on are the needles used to pull sutures.  And needles can serve as their own monopole antennas.  Of course, Aspen Surgical wants to sell you all of those consumables as well.

PFMEA
Process Failure Modes and Effects Analysis is a structured methodology to level the playing field for competing technologies by quantifying the reduction in risk to the customer.


---As an aside:  Mike Nikitin at Check-Fix LLC is an outstanding guy to ask when you have any questions regarding PFMEA.  He can be contacted by calling (eight, one, zero) 599-6770---

While there are many ways to score PFMEAs, they always have a Severity rating, a Frequency rating and a Detection rating.  The three ratings are independent and are multiplied together to create the PFMEA score.

For industries like healthcare, it is not uncommon to double-count the Severity.  In that case, the PFMEA score is Severity*Severity*Occurence*Detection.

Mike, as my conscience, suggested that I stay with the "industry standard" single-count of Severity.  One of his points was that PFMEA is not useful if it is not consistently applied and that standard PFMEA software does not support S*S*O*D.  I bow to Mike's superior wisdom and left the original text struck-through. 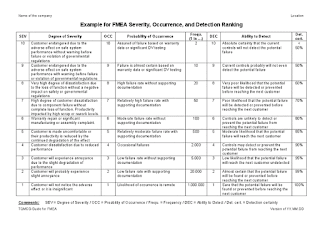 Since leaving a sponge or "sharp" implement in a patient can result in death, the Severity is 10.

I don't have any knowledge about how frequently "accidents" happen, but I will speculate that it happens once every 20,000 surgeries.  That would result in an "Occurence" rating of 2.

Implementing an automated way of counting (as opposed to manual) changes the Detection to a 2 which drops the PFMEA from 60 to 40.  Furthermore, being able to scan the patient before they are sown shut could result in a detection level of 1 resulting in a PFMEA score of 20.

Implications:
The automotive industry gives each critical component like an air bag unique identification numbers when they "born"  The path of every air bag is "traceable".  With a few queries of a database, an analysis can tell you which trucks it rode on, when it was on those trucks, what warehouse and when it was stored in them .  Perhaps more important is that the analyst can tell you the numbers of the airbags siblings.  He can tell you what other air bags shared that truck when the bag was shipped.  He can tell you the air bags that were in the warehouse the same time as the one you have in your hand.

Why that could be useful
Suppose an air bag (or a surgical sponge) is identified as sub-standard.  The flaw may be due to manufacturing variation or contamination during shipping or storage.  It could be due to product tampering by a bad person.

Imagine how useful it would be to identify, quarantine and inspect all products that might have similar defects...with a few commands typed into a keyboard.

At this point the implications are speculative for surgical supplies.  But these capabilities are used every day in industry for critical components like air bags and sensors.

Odds-and-ends
The Sales Rep, Kelly Urban, told me that it would not be a big deal to include an Uninterruptible Power Supply if the customer wanted one.  There is certainly plenty of room on the stand to include one.

It did not occur to me to ask how the unit was sterilized.  Sometimes body fluids spray and I think it is mandatory that equipment can be sterilized.

I asked about price and Kelly told me that is negotiated.  It depends on the number of units purchased, upgrade structure and the maintenance contract.

If this is a technology that interests you, consider giving Kelly an shout at Kelly.Urban -at- aspensurgical.com
Posted by Eaton Rapids Joe at 5:00 AM