Orchards are an entirely different kettle of fish than industrial factories.

On a per tree basis, it looks very favorable for the semi-dwarf model at 300 trees to the acre.  Then you consider that trees cost at least $10 each....how could dwarf trees compete? 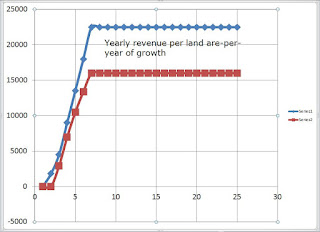 There are two reasons 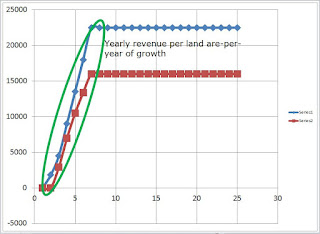 The first reason is that on a per acre basis, the 1000 trees produce more apples early in the orchard's life than the 300 trees per acre.  The graphical representation is shown in the green circled region.

The second reason is that the fruit from the 1000 trees will produce more fruit per acre, and receive higher prices per pound of fruit due to more consistent quality than the 300 trees.  More fruit, higher prices means more revenue per acre through the entire life of the orchard.

Where is the downside
I flogged the economic model.  That is, I made all kinds of changes to the inputs in the Excel spreadsheet.  In no case was I able to make the Net Present Value of the 300 tree orchard outperform the NPV of the 1000 orchard.

I moved the price paid for fruit from 2X baseline assumption to 0.3X baseline.  No dice.

I changed the price per apple tree from $10 a stem (baseline) to $25 a stem.  The 1000 tree still won.  The 1000 slender-spindle trees per acre are a little more expensive than typical trees because, to make the system work, the grower wants to plant a 6' tall tree that is already covered with short, "feather" branches.  The nurseries are working very hard at growing this kind of tree because those are the only trees that are salable.

A point that was not included in the business model is the potential that very dense, very uniform orchards offer for automation.  Even something as simple as a "float" or mobile, multilevel scaffolding that offers the pickers the choice of picking from ground level (ahead of the float), 2' above the ground or 4' above the ground.  The floating platforms could be precisely 40" apart and the platform could stop based on optical or "cat whisker" sensing of the trunk.  Picked fruit could be dropped into a carpet lined funnel and corrugated "drain pipe" could transport it to the bin being towed behind the float.

Little more than a lawn tractor with hydro-static drive and some 2X4s and plywood decking.  The one operator would always be picking in his "ergonomic window" from belt-buckle to shoulder height.  Eliminating ladders makes the job safer.  By pruning the trees so they are very slender and using mobile scaffolding, all of the apples can be picked from the preferred work zone.

The picker should be able to pick more apples per hour (maybe 30% more) because he is not wasting time maneuvering.  Less yanking and tugging means less shaking of the tree and fewer apples dropping.

Loose a sector of irrigation due to voles chewing through the poly hose and the trees die.

Lightening hits the support wires and the trees die.

The posts holding up the support wires blow over and the trees break at the graft union.  And the trees die.

If you lose a crop due to frost or hail or an early freeze or a new strain of fire blight...you better have a forgiving lender because you have $20,000 of debt per acre to service.

Choose the wrong variety of apple to grow and you might as well rip them out of the ground and replant something that will command decent prices in the market.

Growing apples at 1000 trees per acre is like flying very close to the ground at a high rate of speed.  Momentary lapses in attention are fatal...at least to the profit of the enterprise.

Why would anybody plant a 100-to-300 trees/acre orchard?
Lower density orchards have the ability to "hibernate", that is, to go into a mode of low input-low output.  They can have tree survival rates even when the irrigation fails and sod grows up to their trunks.

So, based on this simulation, a medium or low density orchard is a viable back-up food production strategy for when the SHTF or as a system that can temporarily "hibernate" if/when credit or other critical inputs become unavailable.
Posted by Eaton Rapids Joe at 6:57 PM