Getting Inner-City, Coal Miner and Mississippi Delta Athletes into College

Saturday morning I found myself standing on a balcony watching college athletes compete.

Events moved slowly.  There was a lot of dead time and I found myself chatting with the gentleman standing to my immediate right.

He pointed down at a competitor and said, "That's my kid." so I assumed he was a parent watching his child compete. 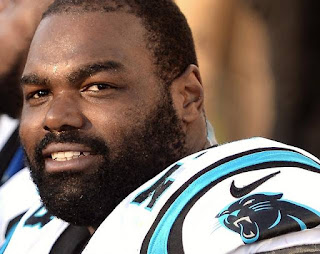 During the course of our conversation I opined that a lot of great athletes never make it to college.  That is something Michael Lewis (author of the book Blind Side) stated: That 9 out of every 10 Division I capable athletes in the inner-city never go to college, not even a community college.  Furthermore, I said, any school that could figure out a way to get those athletes on-the-bubble into college would have a tremendous competitive advantage.

Even if they went from 1-in-10 to 2-in-10 that would double the yield.  It would be like drinking from a fire hose.

His response
"Sounds great but it is not as easy as you think."

At that point he revealed that he was the head coach of a team from a Division I University.  Yes, I checked.  He is for real.  His teams won over fifty League titles in the past thirty years.

According to him it is more than simply identifying the athletes on the bubble and giving them a "Big Brother" or "Big Sister".  It is more than facilitating tutoring to pull their grades up.  It is more than finding scholarship money for them.  He knows.  He tried (with limited success).

For example, most of those athletes-on-the-bubble are the first in their family to attend college.  There are many things that college graduates assume..Things that are simply a part of our culture.  Those things are completely opaque to non-college families.

One of the things he mentioned was the concept of budgeting.  Scholarship money is earmarked.  So much is for tuition, so much for lodging, so much for food and books and transportation.  Many of these families see a huge pile of money and don't understand why there is not enough for "Mom" to buy a large screen TV and Sis to buy a new car and for Uncle Billy to visit Los Vegas.  They just do not have meaningful experience managing "windfalls".


Every poor person I knew got a big check one time a year in the form of their tax return. They made just enough money to file taxes, and made little enough to claim "earned income credit," which is a tax credit that can dramatically boost your return. For my ex-wife and I, it meant getting around $5,000 at the end of January. And just like many poor people, we'd be broke within days of cashing that check, our living room sporting a new TV. Or we'd replace our old computers and all of our furniture. There's a reason many poor people blow through that money instead of saving it for future bills.

When a windfall check is dropped in your lap, you don't know how to handle it. Instead of thinking, "This will cover our rent and bills for half a year," you immediately jump to all the things you've been meaning to get, but couldn't afford on your regular income. If you don't buy it right now, you know that the money will slowly bleed away to everyday life over the course of the next few months, leaving you with nothing to show for it. Don't misunderstand me here, it's never a "greed" thing. It's a panic thing. "We have to spend this before it disappears."

And bear in mind that budgeting is just one hurdle to getting, and keeping that kid in college.  There are other challenges.

This coach was graciousness personified (I would list his name and school but I do not have his permission).  He said that in spite of all the challenges some coaches, a rare few, manage to do exactly that: Recruit world-class athletes from families without college backgrounds.

He specifically mentioned Connie Price-Smith as an example.  Connie is very successful at finding athletes who are not college bound and making it happen for them.  Not only does she get them in college, she keeps them in college.

Connie Price-Smith's specialty is throwing.  Throwing is technique intensive.  Performance is very strongly correlated to age and experience.  Winning programs are programs that not only recruit great athletes, they are programs that retain athletes for their full four years of eligibility.  Obviously that cannot happen when an athlete washes out of college half way through their freshman year.

Like Yogi Berra said, you can learn a lot by just listening.
Posted by Eaton Rapids Joe at 7:49 AM