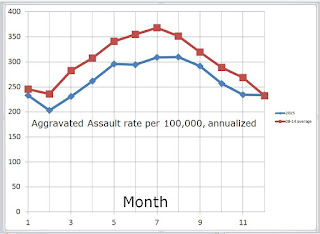 Monthly data supplied the by the Michigan State Police Data Analysis and Reporting Unit.  (H/T to the DARU, they were VERY helpful)

The bottom axis is the month of the year.  That is, 1=January, 2=February...  Historically, June, July and August have the highest rates of Aggravated Assault in Michigan.  The numbers charted are annualized to make them directly comparable to the numbers reported nationally.

It is notable that the blue line (2015) presumably when many cities were rioting is lower than the red line by 50/100,000 for all months except January and December.

I think Michigan's Law Enforcement Officials and local government officials deserve a huge "Atta-boy".  The data says that anti-social behaviors in Michigan went down...by a bunch...when the media was telling us that behaviors in the United States were getting much worse.