That is a bit difficult because our garage is between the house and the dog kennel.

I asked her if she would be receptive to the idea of my installing some security cameras.  We went outside and talked through where it would make sense to put them.  Field-of-view is one major consideration, but so is protecting them from the occasional errant basketball.  Mrs ERJ also wishes that they not be too conspicuous.  But other than that she thinks that is a fabulous idea.

TMI
Too much information.

I like learning about "stuff" and this has a very steep learning curve.  There are multiple "standardized" cable and communication protocols.

The lucky part is that our needs are simple.  We need relatively few cameras and want to be able to watch in real-time.  One camera needs to be a wide-angle.  The other a bit more focused, say 15 feet of view at 30 feet.  Any additional cameras would be a bonus.

The wide-angle would look at the dogs.  The narrow focus would be strategically placed to look at faces of drivers or license plates of vehicles coming up the drive.

I would love to be able to display both of them on a wide screen monitor, side-by-side or to have the camera switch every two seconds.  The monitor would be mounted by the door we normally go out so we can simply walk to the door and watch TV for four seconds before making some decisions.

Sometimes having a locked door between you and trouble is the only thing that buys you enough time to do the things that must be done.  It does not pay to put yourself in a position where you must go outside to assess the situation.

At this point it looks like Powered-by-Ethernet, variable focus cameras are a good option, as is a cheap, 19", flat screen VGA computer monitor.  The mystery is all of the black boxes that must go between them to make the system work.


As I said, it is a very steep learning curve. 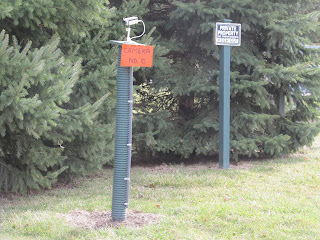 One of my neighbors has a security camera at the end of his driveway.  What is cute is that he has it conspicuously labeled  "Camera No. 10" which suggests that he has many cameras.  This is clearly not The Gray Man strategy.

I think a bit of misdirection is appropriate in security applications.  The risk for this guy is potential perps might wonder what he has on the premises that warrants so many security cameras.

That is also one of my concerns when cameras with night vision (IR emitters) do not have motion sensing activation.  Why do I want to transmit that I have cameras and their exact locations?  Even better than motion sensing would be to have the IR emitters not co-located with the camera AND have them motion activated.

An intermediate solution is to mount a few obsolete or broken trail cams in discrete places.  So much the better if some of them work.

I am humble
If any of my readers have experience or opinions....I would love to have you chime in.
Posted by Eaton Rapids Joe at 6:52 PM