I had a question come in via email on the post Buy Low, Sell High.

The writer wanted to know how many retirees were still making house payments.

There about 110 million "households" in the United States

75 million of them live in what are euphemistically called "owner occupied housing".

25 million of them live in housing that is completely paid for, that is, the bank does not have a lien against the property.

When broken down by age group we see 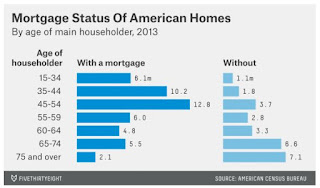 Posted by Eaton Rapids Joe at 6:54 AM