Failure is the default

Remus, author of the Woodpile Report once observed that engineers are inherently conservative because they realize that most experiments fail.  That is, failure is the default.

As a result, engineers tend to cling to what has proven to work.  That does not mean that they stop pushing the frontiers of knowledge.  Rather, it means that they require significant amounts of PROOF that new is better before they abandon the known, proven, working system.

The "Social" sciences, by contrast, often succumb to the temptation to monkey with the measurement system when the results do not conform to theory.  Elegant rationalization replaces intellectual rigor and academic honesty.  I offer the morphing of the measurement protocols and methodologies for inflation and unemployment as prime examples.

Consequently, people in the social sciences can fall into the error of thinking "newer" or "different" is always "better".

Human nature
Conservatives are culpable, to a small extent, for this trend.  It is human nature to NOT report our failures.  When was the last time you read a blog essay titled, "I screwed up."  If bloggers were completely unbiased reporters then 97% of our entries could have that title.

Not reporting failures has many consequences.

Another thing to consider is that efforts that do not deliver the most desirable outcome still have much information embedded in them.  Consider a drug that has easily mitigated side-effects and almost delivers the desired result.  Not reporting the results might deprive humanity of a treatment for malaria.

So, with no further ado...here is an example of the Eaton Rapids Joe Think Tank in the default condition:

In industrial processes, dispensed materials are usually adhesives, sealers, coatings and the like.

In the good old days, a technician would open a viewing port once an hour, eyeball the results and make a notation on a clipboard.  A trained technician was probably good for +/- 6mm (roughly 1/4") for automotive applications.

Technology marches on.  The preferred method is now to use digital cameras to snap a "shot" of the part + dispensed material and to count pixels and to do "math".   It is no great trick to have this method be good to  0.25mm (the thickness of three sheets of paper).

Two problems with the new technology present themselves.  One is that technicians are likely to use 0.25mm as the GO-NOGO even if history indicates that +/- 5mm is sufficiently precise.  The other issue is a problem of contrast. 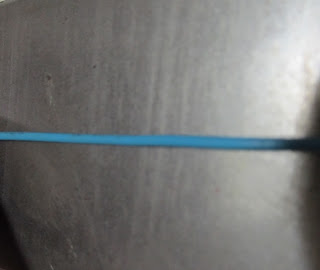 As a human, you might look at this simulation of a dispensed material on a steel coupon.  No problem...right?

But that is not what the digital camera sees.  It "sees" in Black-and-White.

The problem is compounded because the adhesives with the most impressive mechanical properties, the ones used in the most critical applications, are rarely black (the default).  Typically they are blue (Example) or white or unpigmented.

That poses a problem to the PFMEA practitioner:  The most critical applications have the lowest ability to detect defective dispense.

So the solution should be very simple, right.  Simply illuminate the blue dispensed material with orange light. 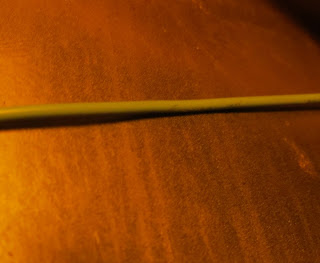 Hmmm!  That does not look very black.  In fact, it looks a little bit...BLUE.

Let's look at it the way the camera will see it. 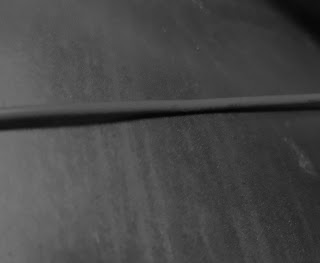 In re-evaluation, it is possible that the "orange" light is not pure 590 nm light.  RGB monitors fool the human eye into "seeing" orange by mixing 100% red, 63% green and 0% blue.  The orange LED bulb used for these experiments may have used an RGB strategy and the green component may have "lit up" some of the blue pigment package.

Another possibility is that the material had large amounts of white pigment and small amounts of blue pigment.  The light may have simply bounced off the titanium dioxide particles.  These seems less likely because the color photo shows a distinct "bluish" cast.

So was this experiment a total loss?
No.

Here is another picture from the same series. 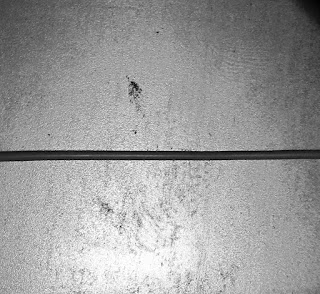 Quite by accident, this photo placed the light source so that it maximized the reflectivity of the metal test coupon and made the light blue bead dark by contrast.

Ironically, another effective strategy is to use a point light source that is oriented with the panel such that the bead throws a "shadow" with the camera positioned to best see that shadow. 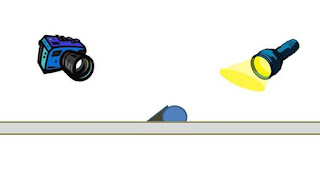