How accurate are totally novice shooters?

I wish I could find 10 people who have never fired a gun.

I would love to set them up at 10 yards with a .22LR rifle and "baseline" their accuracy in terms of MOA. First with iron sights, then with a scope, both fired "off-hand".

I have the firearms.

I have a place to do it.

I just need the volunteers.

Why?
One of the modern trends in education is to objectively measure the "learning" that occurred.  How else can an instructor validate his teaching methods or improve?  So it is now fashionable to start a course with a pre-test.  The performance gain between the final test and the pre-test is the value-added by the training.

Most instructors are loath to do this kind of test because we are conditioned to make our students as successful as possible.  It feels like we are programming our students to fail if we just give them safety training and then tell them to take ten or twenty potshots at a target.  And it is...if no more training follows it.

My very best google-fu was unable to find any data or estimates of the accuracy of a completely novice shooter.  That is a major shortcoming I would love to fix.

I was at a Gun Show on Sunday and I asked a few people to estimate how accurate totally novice shooters might be, based on their experience.  The general consensus was that they thought most totally novice shooters could keep 5-of-10 shots on an 8" paper plate at 10 yards with a rifle the first time they stepped up to the firing line. 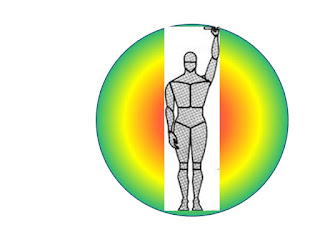 The frontal area of a 50th percentile male is about 1000 square inches.

The area of an 80" diameter circle (8" paper plate at ten yards translated to the equivalent MOA at 100 yards) has a frontal area close to 5000 square inches.

IF the folks at the gun show's estimates are close, that means that a Posleen normal shooter, firing at a human-sized target that is 100 yards away has about a 10% chance, per shot,  of hitting him somewhere.

It would be interesting to do this with real data.
Posted by Eaton Rapids Joe at 9:27 AM