DOOMSDAY PREP FOR THE SUPER-RICH!!!

There are probably a half dozen recent articles out there on that general theme: 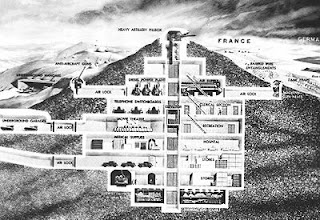 Billionaires recreating the impenetrable Maginot Line or the unsinkable Titanic.

There is a much better way.  And the most beautiful thing about this way is that you are probably already doing it.

From Charles Hugh Smith, may he have mercy on me for excessive excerpting:

All of which is to say that the locals will know where your hideaway is because they have lots of time to poke around. Any road, no matter how rough, might as well be lit with neon lights which read, "Come on up and check this out!" If a teen doesn't spot your road, then somebody will

So creating a high-value horde in a remote setting is looking like just about the worst possible strategy in the sense that the flatlander has provided a huge incentive to theft/robbery and also provided a setting advantageous to the thief or hunter.

If someone were to ask this "hick" for a less risky survival strategy, I would suggest moving into town and start showing a little generosity rather than a lot of hoarding. If not in town, then on the edge of town, where you can be seen and heard.

...ask questions and spreading a little money around the local merchants. I'd invite my neighbors into my little plain house so they could see I don't own diddly-squat except some second-hand furniture and a crappy old TV.

If I didn't have a practical skill, I'd devote myself to learning one. If anyone asked me, I'd suggest saw sharpening and beer-making. You're legally entitled to make quite a bit of beer for yourself, and a decent homebrew is always welcome by those who drink beer. It's tricky, and your first batches may blow up or go flat, but when you finally get a good batch you'll be very popular and well-appreciated if you're of the mind to share.

Because the best protection isn't owning 30 guns; it's having 30 people who care about you. Since those 30 have other people who care about them, you actually have 300 people who are looking out for each other, including you. The second best protection isn't a big stash of stuff others want to steal; it's sharing what you have and owning little of value. That's being flexible, and common, the very opposite of creating a big fat highly visible, high-value target and trying to defend it yourself in a remote setting.

There is much more at this link

And here is a recent essay he wrote that is much in the same vein.
Posted by Eaton Rapids Joe at 3:54 PM