Much is being made of Putin's sabre rattling with regards to nuclear retaliation in the event of NATO overplaying its hand.

The scenario from the first Cold War had mutual annihilation of the USSR and the USA after we had reduced each other to slowly cooling puddles of molten glass.

Politicians assured us that most Soviet nuclear warheads targeted chunks of Wyoming and North Dakota as that is where many of our ICBMs were located.

More recently, there have been questions about the accuracy and reliability of old, Soviet era delivery mechanisms. One could raise those same issues with the oldest US hardware as well. Rust and entropy never sleep.

Recent news is that Russia, the heir to the shrunken Soviet Empire, has been acquiring "short range" ballistic missiles from Iran. New production, battle-tested missiles.

Let's play with some strategic scenarios. 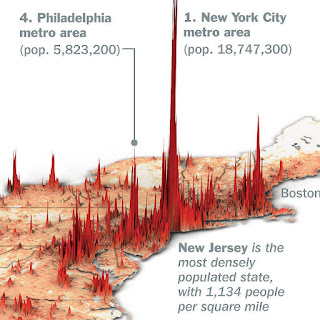 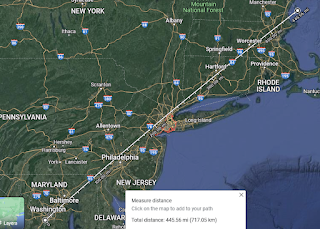 Accuracy is a matter of repeatability with regard to range and azimuth. When firing abeam from a ship that is rocking the most difficult of the two to control is range, consequently the most desirable shot is "Enfilade" targets where if you do not hit the preferred target there are "acceptable" targets both closer and farther away.

A ship 12 miles off-shore Portsmouth, New Hampshire has a 445 (land) mile enfilade target from the north-Boston suburbs to Alexandria, Virginia.

A ship or a set of CONEX containers in Newark, New Jersey has two enfilade targets 180 degrees apart: Boston 200 miles to the northeast and Alexandria, Virginia to the southwest.

The other side of that calculation is that an enraged, hungry population can be your army. You don't need to invade a country if you can deprive and then direct the resident population.

The Gulf Coast would be hammered.

Then there are the domestic, eco-terrorists that are being energized by the mainstream media.

While all US cities are vulnerable to these attacks, the cities in the southwest are especially vulnerable because they dangle at the end of very long, isolated supply lines for things like water, electricity, petroleum products and over-land transportation.

Foreign powers have the ability to do untold damage to the United States with relatively few nukes delivered by missiles, even low-tech missiles.

The most vulnerable targets are high volume, deep-water ports because they are easy to access and have very high, strategic value.

Foreign powers that have demonstrated little regard for their citizen's lives should not be expected to respect American lives.

The Northeast megalopolis offers enemies some obvious targeting advantages if running up the body-count is one of their metrics.

Stay away from crowds and big cities.

Posted by Eaton Rapids Joe at 8:17 AM