Things were going swimmingly until I got to the last step.

The stupid inner wire of the coax will not insert into the antenna jack on the TV.

Mrs ERJ, who has much to say about the priorities around here, suggested that we might want to have the ability to access commercial, broadcast TV now that we have a grandchild.

Given the budget "OK" I sunk a 10' 4-by-4 into the ground* and then added a 1" diameter, steel conduit to that. Given the amount of post in the ground and the overlap between the two parts I have a 16' mast.

The antenna was installed. Coax run beneath the overhang and a hole drilled in the siding. Nothing very complicated.

I am thinking of getting a coax connection, greasing it up and using a little bit of brute force. I don't want to ball-up the part that came with the antenna but maybe a little bit of grease in the right places will ease things. 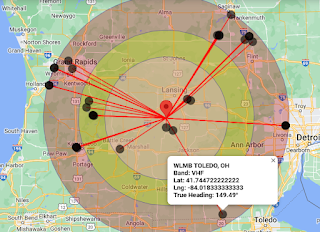 Right now the antenna is aimed south-southeast. We have the local FOX and NBC affiliates about seven miles away and a Christian TV station about 60 miles out.

The antenna was dirt cheap at about $40 and it promises 30dB of gain (a factor of 1000) and a 30 degree arc in the horizontal sweep where the gain is maximum.

*Shrink-flation alert: Ready-to-go concrete bags have been downsized to 50 pounds. I remember when they were 80 pounds, then more recently 65 pounds....