Meat Grinders and such 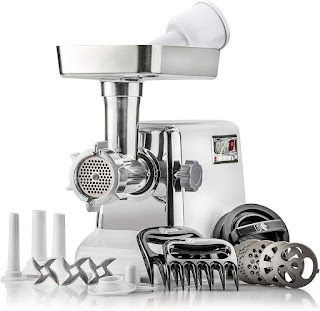 I recently purchased a power meat grinder. It is a loud, powerful brute with a 10A current draw and a three-pound hopper.

The box was sitting in our driveway when we came back from our monthly "date" with Belladonna. Bella was in the minivan and offered to move the box.

After moving the box, Bella gave me a saucy grin.

"You know, Dad, there is an app for that" she said.

"Whaddya mean?" I asked. I could not imagine a smartphone app to run a grinder. This grinder came with a foot-pedal but it didn't say anything about WIFI connected.

"There is an app called 'Grinder'...but it is probably not for you" she told me.

I took a peek after she left. She was right. It is VERY MUCH not for me.

We have company coming on Saturday. Part-and-parcel of being empty-nesters. This promises to be interesting. It is an eclectic group of people showing up.

I also promised to watch Belladonna compete in a Cross-fit competition in a community that is a two-hour drive away. She was describing the various challenges...doing pull-ups while flossing their teeth with a silk thread held between the toes of their feet. Shooting eggs with a BB gun while standing on the shoulders of a team-mate who is riding a unicycle through an obstacle course. That kind of thing.

Kubota is learning that "cool" and "economical" are usually at opposite ends of the spectrum.

I think many parents face the same kinds of tension we face. How much "failure" do you allow a child to enjoy before presenting a solution? There is not a single, right answer. The diversity in our kids and in our parenting choices creates a broad swarm of people with different skills and world-views.

One solution that would allow him to have his cake-and-eat-it-too would be to re-shoe his ride with stock rims-and-tires. He can keep the "cool" (but bald) ones for the weekends when he goes 4-Wheeling with is buds and drive the stock-sized Street-front and A/T rears to work 50 weeks of the year.

He may crap all over the idea but it is a thought. Stock tires are 1/3 the price of the "Mudder-Frs".

Mrs ERJ remembers that we helped other kids with tires. Tires and brakes and oil-changes.