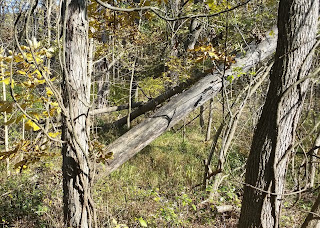 Krystal awoke to the smell of frying sausage and freshly brewed coffee.

Getting up, she yawned and stretched. The mattress was softer than she was used to and she had slept longer than usual.

Padding down the hallway in her night shirt, she saw Aunt Alice setting the table. Wordlessly, Krystal started helping.

Alice gave her a pat on the back. “I can handle this. Why don’t you put some clothes on? We have a long day ahead of us.”

Krystal did not argue. She quickly washed up and threw on the grubby cloths she had worn the day before. Somehow “...long day...” did not sound like they were expecting company.

Ed was in a jovial mood and talked almost non-stop during the breakfast. There was enough food on the table to feed a football team.

“We got a ton of downed timber in the swamp and I didn’t have a good way of getting it out before the ground floods again.” Ed said. “With the price of LP this year, being able to burn wood will be like printin’ money.”

Krystal shot a look at Alice. Interpreting it correctly, Alice told her “We might help a little bit with stacking at this end, but mostly you-n-I-n-Mattie will be digging potatoes in the garden.”

Then Ed interjected “I tole you there was a reason why I planted seven rows of potatoes this year” as he looked at Alice.

Alice made a big show of mock-eye rolling. “You ALWAYS plant seven rows of potatoes and we never dig more than a third of them.”

“You can’t say ‘never’.” Ed defended himself. "We dug them all the last year the two boys were here.”

That elicited another set of eye-rolls.

Krystal was glad she had donned the already grubby jeans. Digging potatoes had to be dirty work.

Alice said pointedly, “Nothing is going to happen outside until it gets light. That will be about a half hour. Me and Ed will do the dishes and watch Mattie iffin you and Clayton want to go back to the bedroom and make the bed.”

Ed started filling the sink with hot water. “Yup. Be at least a half hour” he affirmed. And then he shot Clayton a very subdued wink behind Krystal's back. At least it was subdued by Ed’s standards.

Ed turned on the small portable radio by the sink and tuned it to a local country music station. “I like a little music while I am doing dishes” he said defensively.

Clayton’s expression suggested that he hardly believed what he thought he was hearing but he wasn’t going to look a gift-horse in the mouth.

Reaching out and gently grasping his wife’s hand, he suggested “Yes, let’s go tidy up our bedroom. It should only take about a half-hour, right?”

***
Clayton was eyeing the downed and tangled blow-downs in the swamp with a bit of apprehension. The trees were mostly ash trees that had been killed by the Emerald Ash Borer. The roots had quickly rotted in the damp soil and they had toppled during the summer storms.

Many of them had lodged in adjacent trees that were still alive. The lodged trees were oriented every-which-way as they had not all fallen in the same storm and had been pushed over in different directions.

It was a mess and there was still a lot of potential energy in the logs that were suspended above the ground.

Unlike when he was in the house, Ed was quiet and let Clayton get a feel for the scene.

After a bit, Ed asked “What are you thinking?”

“How long before the swamp floods again?” Clayton asked.

“Hard to say” Ed said. “Depends on the weather. It could flood next week or next month or three months from now. I can tell you that the ground gets soft long before there is standing water 'n it might not dry up until the middle of next summer.”

Clayton grunted and walked the edge of the swamp trying to get a feel for the tangle of wood and come up with a plan of how to attack it.
"Doesn't the ground freeze?" Clayton asked.
"Sometimes it does. But more often snow blows in here and it only freezes a couple inches deep" Ed said. "It fools ya. You drive in and then it breaks through, sinking you up to your axles."

“Maybe the smart thing to do would be to focus on winching the smaller logs out of the swamp and staging them on the bank” Clayton said.

“The bigger ones we can buck into 8’ logs and drag out using chains and the skidding cone” he continued.

“Once they are on the bank we can whittle them down to stove-wood size even if the swamp is flooded.”

Ed had to give that thought some consideration. Even though he and Alice owned 80 acres they had rented out the tillable portion for decades and didn’t have a working farm tractor. His plan had been to cut it to 15” lengths and split it down in the swamp, and THEN hump the pieces out one-at-a-time.

Clayton’s plan sounded a lot better to Ed than what he had been planning on doing.

“Let’s take it slow as we figure it out” Ed said. He did not like the look of the lodged trees.

***
Back at the garden, Alice and Krystal were taking turns with the shovel. Alice would dig ten hills, then Krystal dug the next ten.

“Just knock the biggest clods off the potatoes. We will clean them later” Alice told Krystal.

Mattie was in her car-seat napping.

The day warmed quickly as the sun rose in the sky.

Warmed by the sunlight and the companionship, lulled by the simple, repetitive work Krystal opened up and started talking.

She missed her dog.
Next Installment
Posted by Eaton Rapids Joe at 6:00 AM