Are young women more likely to have traffic accidents?

One of the things we have done to ease our children's transition into the "real-world" is to ramp the expenses. That is, we cover their phone-bill for a year and their insurance for six-months. That way they can make decisions in an orderly way and are less likely to feel overwhelmed.

There are a million ways to send a kid out into the world. That is the way the kind-and-gentle Mrs ERJ and I negotiated.

With Belladonna out of the house since August, it was getting to be time to drop her from the auto insurance policy. Mrs ERJ handles such things and called the insurance company to make the adjustments.

Both Mrs ERJ and I were surprised by the amount of money we would save by dropping Belladonna from the policy. It was much more than we expected.

According to the representative for the insurance carrier, women in their 20s are now at higher risk for automobile accidents than young men!!!

If so, it is probably due to the fact that many of them are incapable of NOT looking at their phone when it goes "Bing!": Looking at it, reading the message and responding. 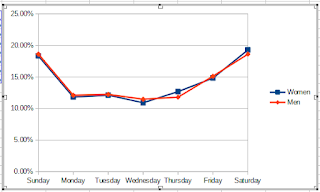 I was surprised that the day-of-week-risk distribution (as a percentage of total traffic deaths) was nearly identical for men and women in their 20s. There is some uncertainty regarding whether the data is the date of the accident or when the patient was declared dead.

Posted by Eaton Rapids Joe at 5:52 AM