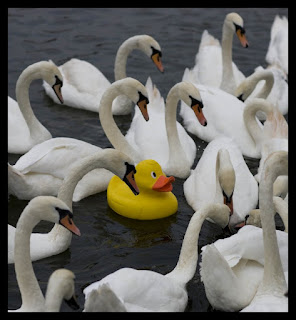 The idea of "Cognitive Dissonance" was first defined in the peer-reviewed literature by Leon Festinger in the mid-1950s.

Like many significant ideas, the impetus for this idea was a "failed" experiment. In this case the experiment involved the amount of effort paid arguers invested in defending a position. The hypothesis was that the more you paid the debater, the more vigorously they would defend it.

Festinger then postulated that our minds HATE puzzles and will backfill with answers that resolved those puzzles.

The subjects who received $20 were able to solve the puzzle "Why am I doing this?" by rationalizing that they were being paid to do it.

The subjects who were paid the very nominal sum could not solve the puzzle that way. Rather than suffer the pain of cognitive dissonance...an unsolvable puzzle...their minds shifted to actually believing the proposition they had been paid to argue.

Our minds  and values are far more plastic than most of us realize. How could we possibly know? Our yardstick is also constantly mutating.

The implications are enormous.

Not only can you "not buy loyalty" but to crassly attempting to pay for it will poison its development.

Undisciplined human minds will ALWAYS embrace the tidy, self-contained answer when offered. So will most disciplined ones.

Festinger postulated that loyalty or oaths can be short-circuited by payment, threats or promises. Those are external forces that bypass the internal value map and allow the subject to rationalize their behaviors.

It is notable that the language for a "Guilty Plea" in many courts contain questions similar to: