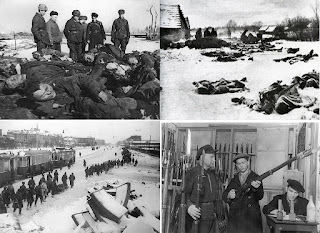 And just like that, Europe and China are hammered with skyrocketing energy costs and power outages. It was a bolt out-of-the-blue.

I don't have any inside information, but I want to remind readers that this kind of thing has happened before.

The Soviet city of Leningrad was under siege by the NAZI army for approximately two years. Many people starved to death.

The death count was exacerbated because the city manager refused to tell Stalin that his stores of food were less than reported earlier.

You see, one advanced in the Soviet system by always surpassing the goals set by the Five Year Plan, especially when you did not actually achieve those goals. The entire system was built on lies. Lies upon lies, upon lies.

Soviet warehouses reported receiving more grain than they received and reported far more shipped than they had actually shipped from the shipping dock. It was the only way to hide the millions of kilos shipped to the Black Market and that went out the employee door to feed chickens at the dacha.

In a similar fashion, cities could not report "shrinkage" or it would look like THEY were skimming (which of course they were).

Given that China's government had its origins in Soviet style communism and nothing is more important in China than maintaining "face", and given that much of Europe is ruled by neo-Communists with a "Green" veneer, is anybody surprised when piles of coal disappear overnight and billions of cubic feet of natural gas and barrels of gasoline seemingly tunnel to a parallel universe?

Maybe there is something nefarious afoot. I am not competent to judge. But I believe that old-fashioned, fear-based, Soviet-style management techniques are entirely sufficient to explain this (and the next ten) surprise shortages.