Marxists at the University 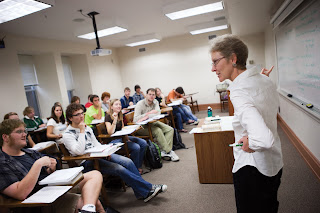 Mrs ERJ was marveling at college professors and public school teachers unshakable commitment to the Left.

I had an insight I shared with her.

In their experience, totalitarianism works and works very well.

They have near-total power over their students.

They are the "smartest one in the room'.

Why would they NOT want to expand this model to the entire nation?

The Insensitivity to Sample-Size Heuristic

This is a clear example of the the Insensitivity to Sample-Size Heuristic.

What looks like a marvelous system to the person swimming in it is a train-wreck to those who do not.

The two major issues can be quickly listed:

The system is an enormous resource sink. The true cost to put a kid in college for a year is approximately $40k and then you can add another $40k in opportunity costs.

The product is not just mediocre, it is tainted.

You scoffed at the numbers. "Nobody pays $40k a year to go to college."

Granted, very few students attend private universities. But going to a public university isn't less expensive. The difference is that the public coffers subsidize the tuition.

Throw in the capital expenses, pensions and benefits that are often hidden in other budgets and you are probably talking about $40k per student per year regardless of where they attend.

Many systems look like viable alternatives until you kick the subsidies out from under them:

Wind-power is barely viable when there are no other alternatives. Furthermore, they use vast amounts of materials that cannot be produced using wind-power. You cannot run a cement kiln or a steel mill on intermittent power.

Commercial Aquaculture relies on cheap protein, including fishmeal from Peru.

Heated greenhouses use fossil fuels and poly films or panels. The gross energy in is vastly greater than the food energy delivered to the consumer.

Factory trawlers are subsidized by various tax credits including credits to the firms that build the vessels. It is worth a financial loss to China, for instance, to provide employment and protein. It is less clear why Germany does it...but maybe it is a case of national pride.

One reason it was so hard to pin Dr Larry Nassar (the pedophile doctor) down was because he was wily enough to commit his crimes at a University.

Most professors are mediocre instructors. They got their tenure because they played the political game. The present the same material that is available in the book. They tell a few self-aggrandizing stories and then let the students out of class ten minutes early.

Many of them do not write their own tests.

The tenure system exists to cover mediocrity, unprofessional and downright criminal activity. It is the opposite of transparency.

Transparency is what allows consumers to reward innovative, high-quality and less expensive producers with resources (i.e. purchase their products and services).

If the University model was extended to the economy-as-a-whole, resources that are sucked up by resource-sinks are not available to reward innovators and efficient producers. The economy tanks by all measures. It tanks in absolute standards and it tanks relative to other, competing nations.

If one of the key metrics of "sustainability" is the absence of external inputs or externalized costs then one must look at the number of students who drop-out.

What other industrial process would tolerate scrap-rates between 15%-and-40%?

Scrap is expensive because it consumes resources (manpower, facilities, raw materials) and does not produce a salable product.

If the entire economy were remade in the image of the college classroom, where would the rejects go? Failed students are an externalized cost no different than water from a nuclear reactor being dumped into a river.

From an industrial standpoint, it would be far better to not admit students into the University or high school if they are very likely to fail.

These realities are not visible to college professors and public school teachers. They think the system they work in has been perfected and believe, with every fiber of their being, that it should be scaled up to include the entire economy.

With them running the show, of course.