Who has compromised immune systems? 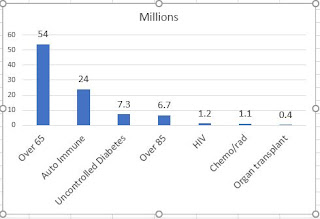 Age 65 and over was chosen because that is the age when the CDC recommends double-strength seasonal flu vaccine "because regular dosage does not illicit a robust immune response". Currently, one-of-six US citizens is 65 or older.

Age 85 and over are immuno-suppressed by definition. One-in-fifty is 85 or older.

HIV positive, many are "under control" but many are not. One-in-three-hundred in round numbers.

Chemo/radiation in the last year. One-in-three-hundred.

Organ transplants, 40,000 a year. Number of survivors is difficult to find so I estimated using a 10-year post-transplant life expectancy. Recipients of transplants are commonly on drugs to suppress their immune system so their bodies do not reject the foreign organ.

If you add up the numbers (leaving out the over-85 because they are already counted in the over-65) you learn that as many as one-in-four falls into the category of Immuno-compromised.

Posted by Eaton Rapids Joe at 8:14 AM