Short-cycling of the furnace at the Hunting Lease

Those of you who have been following this blog for a few years know that the furnace at the hunting-lease has been short cycling.

While my attempts to "fix" the furnace have been epic, they are by no means as epic as the dad on A Christmas Story 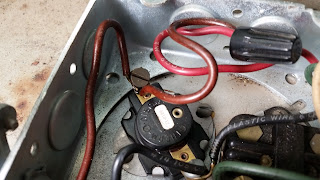 To make a long story short, I chased voltages through the hardwired control logic to the junction box that fed the motor. That junction box was on top of the heat-exchanger enclosure.
Popping the cover off the junction box, I saw the cause of our short-cycling problem.
A repair person with more imagination than money had substituted a snap-disc thermostat for the proper fan-limit-control. 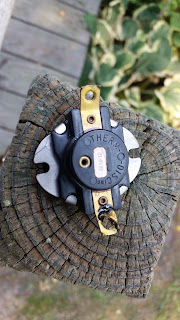 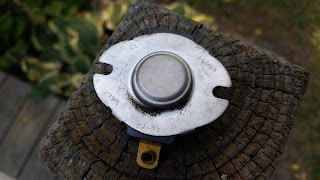 The proper limit switch (between $80 and $160 on-line and probably twice that much purchased locally) has a probe or a stalk that extends between 5-and-11 inches into the Stygian depths of the heat-exchanger. The $12 snap-disc merely senses the temperature of the outermost skin that is furthest from the fire-box. That skin is slow to warm up and quick to cool off.
I ordered a fan control limit with a 5" probe. I do not have a manual for the furnace and it is an off-brand that has been extinct for decades so I am rolling the dice.
One of the nice things about the proper fan control is that you can "program" it by setting the pointers.
The furnace DOES have a fan control unit but judging by the soot on the probe, it is in the fire-box and I am not sure it does anything.
Another puzzling thing about this furnace is that I don't have a mental picture of the air flow through it. I know the blower is at the top of the unit and it blows down. I know the ducting for the structure runs below the floor.
I think the air around the control switch heats up via convection but then I don't know if the probe is in the air-stream after the majority of the heat-exchanger or before. If it is in the stream before it goes through the HE then the rush of ambient air it will very quickly cool-off the probe and turn off the fan.
Another weird thing about this unit is that approximately 24" of bare exhaust pipe runs inside the cabinet with all the exposed wiring and electrical doo-dads. I bet that wire gets pretty toasty.
That is the mystery of off-brands. You never know how much validation testing they did before selling units.
It may turn out that my best option is to by-pass the snap-disc thermostat and simply let the fan run the entire time we are heating the structure, regardless of whether the burner is producing BTUs. I don't see much downside. Over the 45 days of November and December that we are likely to heat the structure I doubt that we will use more than $5 of electricity.
Posted by Eaton Rapids Joe at 6:00 AM