We are in the process of cleaning out Mom's non-frostfree freezer in the basement of her house. One of the items we rescued are Klondike bars. Lots and lots of Klondike bars. 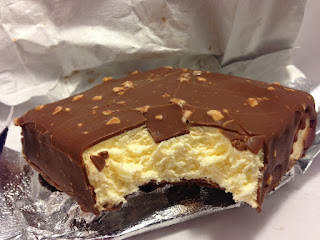 Since nobody in our family really needs the calories, and because wasting food is a sin; I decided these would make fine treats for the two German Shepherds.

I did eat one of them, for scientific research, and there were a few ice crystals in them so I am dubious about donating them to a food bank. Not that they are bad but that people have expectations even when things are "free".

Belladonna was not happy with me feeding Herc chocolate. She laboriously peeled the chocolate from the quarter-bar I was going to give him.

That started a conversation about "How much chocolate can most dogs tolerate?"

The internet came to the rescue.

Mild chocolate toxicity occurs at about 20mg/kg of theobromine. A gram of milk chocolate has about 2.4mg/gram or 67mg per ounce.

If you use a quarter of the "mild toxicity" level as a threshold, then an ounce of milk chocolate* per 30 pounds of dog should not a big deal.

Since the chocolate on the Klondike bars is a thin wash (primarily to make them easier to handle) and is very low in chocolate and because the German Shepherds are in the 75-to-100 pound range, the amount of milk chocolate (for them) is well below the three ounces that our (conserative) calculations indicate are unlikely to be an issue.

Long-time readers know that I sometimes cast knick-knacks from pewter. It helps me pass the time on rainy days and keeps me out of trouble.

I recently picked up a gently-used, six cavity mold on fleaBay for about $60 and I gave it a work-out today. I was able to cast about 600 knick-knacks in an hour-and-a-half. 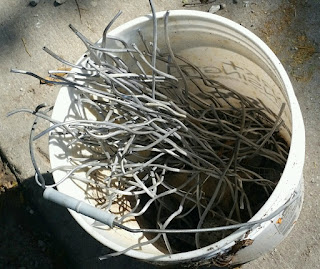 One of my neighbors, upon hearing of my hobby, informed me that he had many, many pounds of suitable alloys. Later that day he sheepishly apologized that he didn't have nearly as many wheel-weights as he thought he did. Would I have a problem accepting about ten pounds of 50:50 lead:tin solder instead?

I graciously accepted his gift. What a great guy!

A couple of BaoFeng radios fell into my clutches. Because China exports to hundreds of countries with conflicting regulations, they sell the radios and they have a chip-set that allows them to be programmed to be in compliance with the jurisdiction's regulations.

The FAQs suggest that the contacts in the microphone ports of the BaoFeng model I am working with are a little bit deeper than the de facto industry standard. You can push on the connecter body until you are blue-in-the-face but if the tolerances stacked in an unfavorable way, your laptop will not talk to the radio.

It seems as if much of this "radio" hobby involves waiting for a boxy, brown truck to park at the end of your driveway.

Liberty is our heavy-lifter for applesauce.

I had a conversation with Steve Tennes who is the owner of The Country Mill which is a commercial orchard. I asked him when he intended to pick his Liberty.

He informed me that he watches the wind forecast. Liberty's aromatics increase hugely with ripeness but the variety is more vulnerable to getting knocked off the trees than many other apple varieties. Starting about September 10 (in southern Michigan) he starts looking at the weather forecasts so he can pull-the-trigger and pick them before high winds show up and they end up on the ground.

Looking at the apples we picked on our property, these apples would not store very long as they are at the cusp of ripeness. They should make superb applesauce.

Next year I hope to pick them a little bit sooner and ripen them in the garage.

Highs were in the eighties last week and will be in the sixties and seventies next week.

The weatherguessers think we will have 2" of rain over the next couple of days.

We can use it.