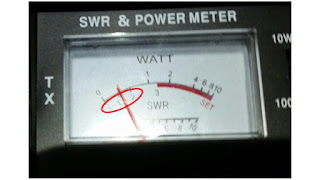 A while back I wrote a post suggested that the best investments are to find projects that are languishing on the five-yard-line and to punch them into the end-zone.

This post is about one of my languishing projects. Perhaps you can relate. Maybe you will see yourself in the story and it will make you smile.

I purchased an inexpensive CB transmitter eons ago. It cost $40 and is similar to the one I linked to.

I decided that a good blogger would follow his own advice. I decided it was time to drag it out of the basement and install it.

A quick review of the internet quickly convinced me that I needed a 1/4 wave, monopole antenna with a ground-plane in an elevated location. If I did everything right and I did not get stepped on by other traffic, a ten mile range seemed within reach.

I found a location on the peak of the garage that was 14' above the ground. That is when the fun started and the dollars started flying out of my pocket. This is where I expect you readers to smile (or grimace) with understanding.

The first bite was not too bad. I purchased $60 worth of copper tubing, lumber and PVC pipe at a big-box store where I had a rebate. I spent $4 out-of-pocket. I felt pretty good about that.

Pipe was cut. Terminals were soldered onto wires. Treated lumber was deck-screwed into the structure beneath the steel-siding of the garage. I was getting close. I just knew it.

Then I did the single, smartest thing of the whole project. I asked Old-NFO if he could provide guidance. He politely declined but then introduced me to Dr Jim, the owner of Every Blade of Grass blog. Dr Jim took me firmly in hand and tried to keep me from making too many mistakes. That was back on August 11.

I think Dr Jim underestimated my ability to make new and novel forays into stupid-land. Old NFO has known me long enough to not underestimate me that way.

Well, since I was paying him the big-bucks for his advice I would be stupid to ignore it. I bought the cable.

Dr Jim also advised loading the various connectors with dielectric grease to exclude moisture and delay corrosion. Corrosion between contacting surfaces is the bane of reliable operation. He also advised Scotch 33+ electrical tape and silicon self-sealing tape to seal out the weather. Another expert advised something similar. A tube of dielectric grease (from the local auto parts store), 33+ and silicon, self-sealing tape showed up on the doorstep in due time.

Then I needed an SWR meter ($30). Then I needed another short length of coax to hook the SWR meter to the transmitter since the 50' cable had already been run and the tinker-toyed connectors sealed up.

I chose to use a 100 Ohm resister in the calibration tool since a Standing Wave Ratio of 2.0 is often considered the threshold of usability. CBs are designed around an antenna system impedance that is the equivalent of 52 Ohms.

Every new thing that I "needed" involved finding it on-line, ordering it and then waiting for it to show up on my door-step. Most days I was waiting at the mail-box like a puppy-dog waiting for his master to come home after school.

The only thing I purchased locally were a couple of 100 Ohm resistors to cobble together the dummy-load calibration tool. Fortunately the various connectors were almost as cheap to buy ten-of so I had extras of those to make the dummy load tool.

Once I finally had all of the pieces-parts and Dr. Jim had hammered enough know-how into my head, it took about 45 minutes to dial the antenna in from a Standing Wave Ratio of 3.0 down to 1.5.

I had two issues that made up the majority of my problem. One wire of my ground-plane was in hard, metal-on-metal contact with the raw steel edge of the hole I drilled through the siding of my pole building.

I also had issues in the routing of my coax. I ran it parallel with the other utility feeds into the house and that proved to be a problem. The black-iron pipe that brought LP into the house was an inductive load for the coax running in close proximity to it.

In fact, the coax did not even like to be draped along the steel curtain rod inside the house.

A Standing Wave Ratio of 1.5 is nothing to brag about but it means that about 2/3s of the power the transmitter is trying to pump into the antenna is being converted into radio waves. That is enough to be functional and not damage the transmitter.

I want to give Dr Jim a huge shout-out. I peppered him with out-of-left-field questions. No matter how arcane or convoluted the question, he fielded them with patience and aplomb. Dr Jim is the very definition of a classy gentlemen.

***Added later*** The total cost of the project was approximately what I spend every month for cellphone service. A number can look scary-large until you find a meaningful basis-of-comparison. For the cost of one month's communication, I now have a second layer of redundancy for command-and-control.

Posted by Eaton Rapids Joe at 8:00 AM