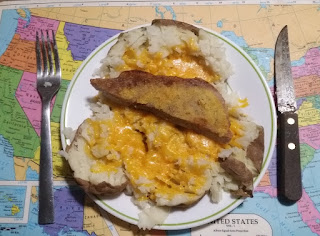 I do my best to accommodate her. Broiled pork chop coated with corn meal, salt, pepper, garlic and onion powder. Potatoes covered with yellow/orange cheese.

Once again I was defeated by technology. I don't know if the screen bounces against my leg and resets? I just don't know.

My plan for tomorrow is to walk the course and tie surveyor's tape at the one mile marks. Then I can drop back to low-tech, $15 wristwatch with a timer function.

My best estimate is that I ran 11:40 minutes-per-miles.

There are a couple of go-to sites for cast bullets. One is the LASC site. The other is the Cast Boolits site.

There are multiple factors that interact that make it almost impossible to give advice that is universal.

For one thing, the hardness of a cast bullet changes as it ages. One shooter may swear by 12 BNH bullets but did he measure them immediately after casting or after a month on the shelf?

For another, many casters don't have a way to measure hardness. They look up references and assume their wheel weights are identical to the ones measured in the reference.

Then there are interactions with lube, bullet geometry and gun geometry.

Then there is the complication that the bullet's base must obdurate when the base of the bullet is fully engaged in the rifling somewhere forward of the chamber. The speed that the pressure drops off as it moves down the barrel varies between large-capacity, designed-for-blackpowder revolver cartridges and small-capacitiy, designed for smokeless semi-auto cartridges.

Since most bullets cast from wheel-weights that are air-cooled now vary between 12-and-14 BHN two weeks after casting, bullets intended for .38 Special probably benefit from a blend of 2/3 wheel-weights and 1/3 "pure" lead. That can be expected to throw bullets between 10 and 11 BHN.

Bullets that are air-cooled and aged a couple of weeks are probably suitable for 9mm but I will appreciate anybody who actually casts bullets and shoots a 9mm or 40S&W.

This is actually a great time to buy pure lead. It is available on eBay for a reasonable price because so many cities are ripping out the lead water service lines because of the problems highlighted in Flint, Michigan.