A couple of "Kubota" stories 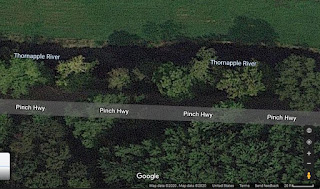 A few years ago, Kubota and I were in the truck. I was on Pinch Highway, just west of Otto Road.

I was driving east and was moving along at no more than a walking pace.

The Thornapple River was channelized and is directly north of Pinch Highway and about four...maybe six feet lower in elevation. Because of the proximity and the elevation difference, there is a right-smart slope down to the surface of the river.

"Dad, why are you driving so slow?" Kubota asked.

"I am looking for the best place to dispose of bodies" I responded.

Kubota assumed I was joking. "That is NOT funny!"

Using the same logic, I wonder how hard it would be to use a magnet to collect undocumented drill motors in rivers, canoes being more likely to capsize in some places than others.

The price of living

Recently, Kubota and I had a conversation regarding how much money he needed to make to have an independent life.

It was as if I was speaking Swahili.

He had never approached the subject of jobs, wages and hours/week from the standpoint of what he needed...how much is "enough" in this economy, in this zip-code.

The median, household income in our area is about $50k. Generally, two people in the household are working.

The median income sets the prices and expectations of a neighborhood. It strongly influences the rents and house prices. It puts a stake-in-the-ground regarding the kind of vehicles you will see parked in driveways.

I got some mumbling in return. It sounded like "Nobody is hiring full-time."

I shook my head. "Then work two jobs or three jobs. At a minimum, you need 40 hours a week and just a skosh over minimum wage. They don't all have to be at the same job."

It had clearly never entered his head to use math to guide him through decisions.

Posted by Eaton Rapids Joe at 8:40 AM