When Engineers work from home 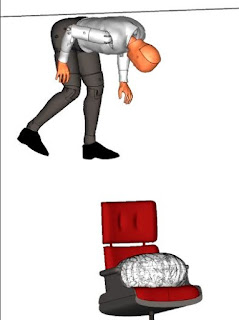 I just came across the 2014 comedy Neighbors starring Seth Rogen and Zach Efron. One of my favorite scenes is when the fraternity next door begins subjecting Rogen’s character, Mac, to a series of escalating pranks after he calls the police on their house party. Mac knows the frat brothers have broken into his wife’s car and stolen the airbags, but he can’t figure out why until he sits down on a booby-trapped office chair.


The airbag launches Mac into the air, slamming him into the drop ceiling before crashing back down onto his cubicle desk. Somehow, he even loses his shoes as he’s tossed into the air like a rag doll.

Now, what would engineers do if they were working from home and had access to simulation software?  (Note: Four second video of simulation results at the link.)

...how high we can launch a virtual Seth Rogen? We set out to find out what would really happen if you sat directly on top of an airbag and deployed it.

We placed the airbag on the seat of a chair where our 200-pound adult human model would sit. For this study, we used the Humanetics Hybrid II 50th Aero FE Dummy Model along with Altair RadiossTM, a solver for highly non-linear problems under dynamic loadings. An aerospace dummy was used rather than an automotive model since it allowed us to observe the axial spinal thrust caused by the initial airbag interaction and forces applied to the neck purely in the Z direction.

...the simulated physics of a surprise airbag-induced flight match up quite well with the movie special effects of Neighbors, but the injury risk data extracted from our crash simulation show how dangerous this experiment could be in practice...don’t try this at home bros.

We also observed forces on the spine reaching nearly 8 Kilonewtons (KN). Though the peak force is only reached for a few microseconds, 8 KN is the equivalent of close to 1,800 pounds of force (over 800 kg).

Posted by Eaton Rapids Joe at 7:15 AM