Is Capitalism responsible for the deaths and privation experienced during the Industrial Revolution? 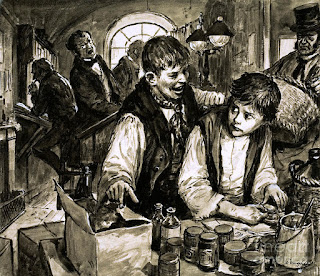 I recently had an opportunity to spend some time with a gentleman I will name "D".

It started with a chance meeting in a park. I started chatting. We had several common interests and stayed in touch by email.

We met a second time. He was a delight to converse with. Not just educated but smart.

One subject he can converse about and make understandable to the average Joe are the many ways that "hill peoples" are disenfranchised by the dominant culture, invariable flat-landers.

"Disenfranchised" by means of not having legal recourse in property disputes, not being allowed to own property or have access to enough property required to live in traditional ways.

Then the flat-landers chase the hill-people into ever-more marginal land and to ever-more abusive agricultural practices as they are forced to generate revenue to pay taxes.

That is when our conversation went sideways.

"D, one of the reasons that I like you is because you are sympathetic to Capitalism" I said.

He recoiled as if he had been bitten by a snake. "Where do you get that?"

"Capitalism is about private property. You just gave me ten minutes of reasons about why hill-people need the property rights that are core to Capitalism" I replied.

"I am not a Capitalist. Capitalism is a horrible system" he said.

I was flummoxed. "How do you figure?"

My mind was racing. I know there are people who can make a cogent case that our (the United States') healthcare system is irrational, expensive and has too many perverse incentives. I wondered if that was where he was going. I decided to ask.

"The Industrial Revolution, for instance" he offered.

The conversation veered off from there. I wasn't going to argue a subject I hadn't looked into.

Is the proper comparison between mortality rates of a country (or economic system) that is in the throes of tectonic shift in production systems with a country that is plodding along steady-state?

Using that approach, one might compare England or Germany (Capitalist) circa 1850 with the USSR (Communist) and Japan (Militaristic/Feudal) circa 1930.

The death-toll for the USSR industrialization easily tops 3 million. That was the body count for the Ukrainian Holodomor where all food was stripped from Ukrainan kulaks (peasants). That food was exported to generate hard currency to purchase industrial tools from Western Europe. In other words, it was a hidden subsidy to the USSR Industrial Revolution.

Estimates for casualties of the Japanese Industrial Revolution vary wildly, but 6,000,000 is a defensible number based on the casualties in just China and Korea.

It is a sleight-of-hand to blame Capitalism for faults that are inherent in massive changes from agricultural to industrial modes of production. In fact, as the first countries to push through that frontier in a major way one would have expected the mortality rates and injustices to be much higher for England and Germany than for the USSR and Japan. After all, the USSR and Japan had a roadmap and it should have been easier and less traumatic.