And they start eating their own 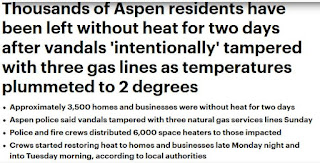 Officials characterized the actions against critical infrastructure as "vandalism".

"Earth First! is effective. Our front-line, direct action approach to protecting wilderness gets results...Earth First! is a priority, not an organization." -Source

Why attack targets with no name-recognition that are a thousand miles away? So much easier to park the BMW three miles from his parent's chateau and do mischief that will make international news. Then back home for lox-on-bruschetta and Yuengling before the Beemer's cabin cools off.

One suspects that the actions would be characterized as "terrorism" if officials did not suspect the perp(s) were the children of the rich, famous and powerful.

Major catastrophes are usually presaged by advance notice. The industrial accident in Bhopal India was "signaled" by the fact that there were more than a hundred documented cases of containment valves being left open by the cleaning crews. On the night of the accident, the crew left five of them open that allowed the release of toxic chemicals to the environment.

That was a hundred documented cases. It is likely that there were many more cases that were not documented.

I see this incident as advance notice that many more attacks on critical infrastructure will be coming.

Frankly, the ERJ family is not. We have vulnerabilities. Our pump is electric and the 45 feet of static head defeats cistern pumps. We have a fire-place insert with a 140 Watt blower. I have just enough solar panel to run the blower while the sun shines but the panels are not installed.

If grid-down became a reality, I could improve our heat situation by pulling the insert out of the hole to expose the entire heat-box and by running about four feet of 6" stove pipe to the chimney. Stove pipe radiates a huge amount of heat and would counteract the loss of forced convection.

But that means I need four feet of 6" stove pipe, two elbows and a couple of sacks of concrete to pour a fireproof apron to put on the floor. I can find those items now. I won't be able to after the grid goes down.

Regarding water, I have good neighbors. I can either hand pump from their shallow wells or dip from their ponds and then hump the water home. I have sleds and five gallon containers but I could use a good wagon or cart.

Posted by Eaton Rapids Joe at 7:13 AM