"Why would anybody pay money to buy Northern Red Oak acorns when they are as common as dirt?"

Granted, Northern Red Oak seems to grow almost everywhere in Michigan except where the ground floods. But they are not EVERYWHERE.

The fact that they are so common speaks well of the species' adaptability. It grows rapidly and the wood is useful for any place a hardwood will serve and it is not vulnerable to rot. The wood also makes fine firewood and is exceptionally easy to split.

The reason I bought acorns was because this year was a dud. Furthermore, there is value in buying seeds from a place about 200 miles south of your current location. They have a little bit longer of a growing season and are more likely to put on one last flush of growth when the end-of-summer rains come. That comes at the cost of slightly less cold hardiness, but Northern Red Oak has cold hardiness in spades so I can afford to give some away.

Another advantage of acorns from a more southern seed source is that they tend to run larger. If I plant them directly in the field (or in this case beneath dead elm and ash) the trees establish better because the larger seeds have more gas in the tank, so to speak.

I purchased these on eBay and I would buy from this seller again.

Walking the dogs at the park 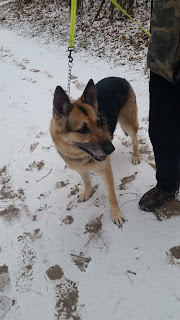 Not much sunlight today 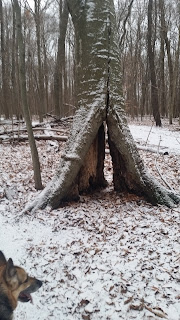 A beech tree with an interesting trunk.

I took the S-10 for a drive today. I had been letting Kubota drive it.

I planned to buy shredded bark and put it around some apple trees. That was not to be. The truck wallowed and wandered and roared.

A quick look beneath truck revealed three-of-the-four shocks were wet, that is, blown out. A little rocking of the body suggested the brackets for the stabilizer bar was no more. Oh, and it needs an exhaust system.

$360 later and I now have four shocks, stab-bar hardware and brake pads in hand.

I do have a gripe with the shock-absorber manufacturers. I really wish they would generate a chart that rated the "stiffness" of their offerings relative to factory OEM damping rates. They describe their products with bushels of pretty sounding marketing words, but after reading those descriptions I still lack ordinal information regarding Monroe OESpectrum vs. Reflex vs. Monotube's ability to dissipate the energy from hitting a pothole too fast.

Clearly, Kubota has been beating the crap out of the S-10. Given the nature of the roads in Michigan and the possibility that my youngest son might drive it again, I will gladly accept a harsher ride if it results in the suspension hammering the stops less often and with less force. The ERJ family is not a bunch of dainty folks.

I ended up buying the OESpectrums but I cannot give you a very good reason. It was one of five listed on the Monroe website for drivers who intend to carry loads in their trucks.

We run the thermostat cool around here 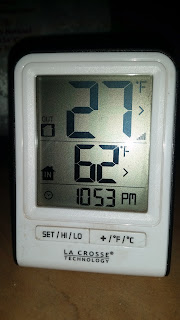 Stop complaining. Three months ago you were complaining about global warming.