The Sanctity of Contracts 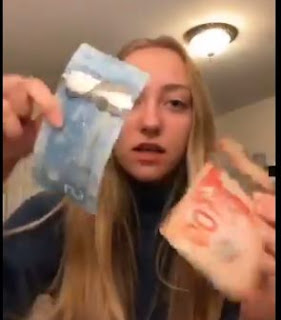 The image shown above is a screen-grab from a video of a young, college drop-out explaining Modern Monetary Theory.

The guts of her argument are that the substrate and the ink to print a $50 bill are no greater than to print a $5 bill.

What she chooses to not understand is that each bill is an implicit contract that promises a  "store of value".

Suppose Warren Buffet printed out a Last Will and Tenement whereby the holder of the document inherited his entire estate. Essentially, he created a single bearer-bond that was worth a lot of money. Then, suppose he held a lottery with the bearer-bond as the prize and donated the proceeds to charity.

Let us suppose Paige (the genius shown above) won the lottery and the bearer-bond was mailed to her.

Enter Eaton Rapids Joe: "Paige, I am such a nice guy I am going to trade you, straight up, five hundred crisp, snowy-white sheets of printing paper and a BRAND NEW ink cartridge for those five, grubby pages with Warren Buffet's signature at the bottom."

Paige wouldn't trade her chance to be a Billionaire for five-hundred sheets of paper because it would not be to her advantage.

Paige supports MMT because it is to her advantages.

Sanctity of Contracts be damned. Her arguments are not cogent because she leaves out the part that ties it together. Paige is for whatever gives her advantage even when it is at the expense of others.

People who promote MMT have a facade of empathy but they are closet sociopaths and would-be destroyers of civilization. Civilization was built on promises and contracts: Made and Kept.