What price for a birth-right and a blessing? 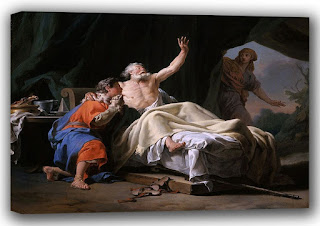 If you turn to the Bible for guidance during these tumultuous times, you might find yourself opening the Good Book to the story of Esau and Jacob in Genesis Chapters 25-through-36.

The opening gambit of the narrative has Esau (the oldest son) trading away his birthright for a bowl of "pottage", quite likely a bowl of hot lentils seasoned with herbs to his younger, fraternal twin Jacob.

Slightly later in the narrative, Jacob reveals himself to be a masterful trickster when, aided by his mother, Jacob fools his father (Isaac) into giving him the blessing intended for Esau.

Jacob then decamps for far-away lands to avoid Esau killing him.

A bit later we learn that Esau had won his mother's disfavor by marrying two, local Canaanite women.

While away from his ancestral home, Jacob enters a mutually toxic relationship with Laban, the man who becomes his father-in-law. For the next twenty years Jacob and Laban try to screw each other over in the  most intricate and back-stabby ways.

Finally, Jacob and his camp and the animals he claimed he was owed head back to his ancestral homelands. Jacob does not trust Esau. Jacob's children lay a village to waste, killing all the men. Jacob moves on.

“See, far from the fertile earth

will be your dwelling;

far from the dew of the heavens above! (Tafilah, Jordan averages 7" of precipitation a year)

By your sword you will live,

and your brother you will serve;

But when you become restless,

you will throw off his yoke from your neck."

Looking at the story, it defies easy identification of who we are most likely to identify with.

Are we Esau, hyper-masculine but simple of mind with little ability to delay gratification? Are we Jacob the crafty fox who is favored by God for no merit of his own?

Are we Laban or Isaac?

It is a strange mix. The leftists entered a marriage of convenience with Chinese actors and hard-core Marxists. In that way they are like Esau marrying the Canaanite women because they were readily available. On the other hand, they were slippery and underhanded and devious much like Laban or possibly Jacob.

Perhaps the only useful thing that can be filtered out of the story is that memories are long and the damage multi-generational. The theft of, or auctioning-off of somebody else's birthright to the highest bidder means that the thief must watch his back for more than twenty years.

One smaller lesson is that there is no honor among scoundrels. Jacob prevailed because God had chosen him. Cute tricks make cute stories but without God on your side you will surely fail...eventually.