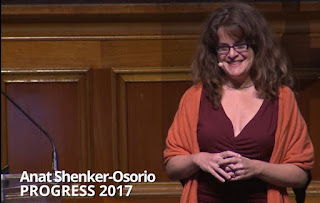 Have you ever wondered why Progressives all sound the same and  why they are incapable of answering simple questions?

There are reasons. For one thing, that is what they are coached to do.

"Conventional wisdom says to meet people where they are. But, on most issues, where they are is unacceptable. Applying tools from cognition and linguistics, we uncover where people are capable of going and how to use our words, images and stories to move them."  -Source

Get that? People are unacceptable. Use 'narrative' to manipulate them.

This site has "guides" on all of the Progressive hot-button issues. Let me deep-dive the one on Police Brutality and Defunding the Police. All text highlighted in blue is taken from that document. Potential responses are highlighted in pink.

It starts with the obligatory froth.

...this has become a fight over American democracy itself, the very nature of the implicit pact between “we the people” and the leaders who claim to govern in our name, purportedly to carry out our collective will....We must seize the story of what is happening, making clear the reasons behind events unfolding in order to have our solutions seem both obvious and worth battling for.

Lift up all the ways people are showing up in cross racial solidarity: examples include neighborhood safety patrols, spontaneous clean-ups, joyous expressions even in midst of protest, food donation and distribution, transit drivers refusing to transport protestors to jail, major corporations speaking in solidarity (no matter how hollow the gesture) etc. These help quell the sense of futility...

The word "futility" keeps showing up in their documents. I suspect that this is driven by focus groups. The sense of "Destiny" is one of the rivets holding their structure together. "Futility" is the opposite of Destiny and Power. One way to plant a torpedo beneath their water-line is to point out that they are the same carpet-baggers who come into poor communities every election cycle and make the same tired promises, promises they have not intention or ability to keep.

Shift discussion from present-tense and observable facts to the future

Make clear, in values-based terms, what people are seeking and create cognitive dissonance between our audiences’ desired self perceptions...

The Progressive movement is founded on the basis of a Utopian vision that will be true sometime in the misty future. Progressives will ALWAYS try to pivot to values, policy and the future. It dies when held accountable for the here, now and tomorrow (literal, not figurative).

You say we need to move away from traditional policing and have Social Workers replace them. We had fifty officers resign in the last month. Give me the names of fifty Social Workers who applied for their jobs. Give me ten. Give me ONE name! There was a screaming need for Social Workers as Parole Officers and they did NOT apply for those jobs because Social Workers don't want that kind of work.

So your vision of defunding the police will abandon single-mothers-of-color in high-crime neighborhoods. It will abandon elderly people-of-color. It will abandon LGBT people and undocumented immigrants who are disproportionately impacted by crime. You are throwing the must vulnerable among us to the wolves to stroke YOUR OWN ego.

Have you noticed the "Peaceful Demonstration" Narrative?

DON’T inadvertently reinforce the opposition’s narrative
▪ Quotations like “a riot is the language of the unheard” actually accepts the premise that events unfolding can be characterized as a “riot.” They can’t.

The Progressives HATE words like "riot" and "looting". Keep using them. They look like liars when they use three sentences to dance around a fact that is accurately summed up by one and two-syllable words.

And they hate the term "Outside Agitators". You and I know that people don't burn down their own house or the drugstore where they get their meds. Those acts are almost always done by outsiders.

...terminology like “outside agitators” is dangerously opaque; it also has its origins in othering people who protest, people of color in particular. Indeed, this is now bandied about on both sides of this conversation. Instead, use the most specific terms possible that accurately characterize the real culprits in the given situation — e.g. white nationalists, white vigilantes, armed Trump loyalists, etc.

Again, Progressives hate being pinned down. Consider how they would respond to

If you have hard evidence that this violence was done by Trump loyalists or a White Nationalist group and you didn't give copies of that evidence to the cops, then you are an accessory to their crimes and complicit in them. If you don't have evidence then you are talking-out-your-ass just like every other two-bit politician.

The Progressives have abandoned "Peaceful protests"

Admonishing people to peacefully assemble misses the reality that violence is frequently coming in reprisal (not from protesters) and anger is an absolutely understandable and potent emotion that leads to a range of behaviors.

Progressives always want to shift (they love the word "pivot") all discussions to an unspecified time in the future. She says so explicitly:

Pivot when possible toward a future-orientation. People reason much more progressively about the future...

As a practical matter, when reading a document like this always look for words like "Shift" and "Pivot" and "Redirect". Then read what comes before that word. Those words are a klaxon indicating that these are the discussions the Progressives are desperately trying to avoid because they do not have solid answers for those issues.

Specifically, the discussion prior to the "Pivot" clue involved "tension and conflict" created by the Progressive agenda.

For example, instead of saying “these protests are about X” say “across our country, people are coming together for X.”

Several paragraphs about avoiding simple statements. Rather, always add a "caboose" of grandiose collectivity. That feeds the "inevitable wave of history" narrative and people want to be on the winning side.

Acknowledge and redirect challenging assumptions. For deeply polarizing issues in particular, carefully acknowledging a person’s feelings of ambivalence or confusion and then pivoting to desired policy or behavior can be far more effective than simply trying to negate or brush aside these concerns.

The next time you are listening to CNN or NPR, watch how they skirt any challenges. Notice they have two klaxon words in this header. Imagine:

I am not ambivalent or confused. These are facts and events that I, and hundreds of other people, saw with our own eyes. How can any moral person encourage rioting, arson and other lethal forms of violence in our communities. How can YOU support it?

Mitigate stereotyping effects by using the singular. When you must describe more challenging elements of what is transpiring, it is far better to say, for example “when a person breaks into a store they do so...” than “when people break into stores they do so...”

Progressives hate numbers. They want to talk fuzzy-hypothetical rather than reality. If thirty-five people were identified on video as looting a CVS store, then work the number "...Are you legally representing the thirty-five riotors who looted the neighborhood CVS or are you speculating again..." into your dialog. Grind their noses into it. Drag them into the killing-field (Facts, Numbers, Reality) they work so hard to avoid. Whack them with that Ronnie Reagan "There you go again..."

Then the document gives three pages of Sample Dialog.

Posted by Eaton Rapids Joe at 5:05 AM