There is an excellent thread on this topic over at 24hourcampfire.

If you only read one comment, read the comment by Mackay Sagebrush. Mackay is a Law Enforcement Officer in Idaho. Unlike most internet commandos, Mackay drilled on some of the scenarios that are frequently discussed.

There are Grizzly Bears in Idaho.

The drill involves targets at approximately 15 yards, 10 yards and then three yards. 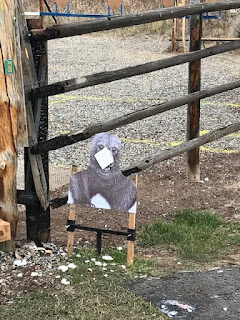 The closest target has a clay bird or a bathroom tile aligned with the bear's brain. To stay alive, you must knock down the steels behind the two targets that are farthest away and the closest target must be hit in the "brain".

This is a humbling drill. "Par" is to clear the course in 3.5 seconds even though EVERYBODY knows a bear can cover that distance in less than half that time.

If you think this is too easy, then start with your back to the course and your handgun secured in your holster. Start when the timer beeps.

Mr Sagebrush then goes on to discuss the interaction between recoil and the ability to make rapid, repeat shots. It is his studied opinion that if you insist on carrying a handgun for bear protection then

Furthermore, he goes on to say that while single-action revolvers are better than no firearm, they don't have the rate-of-fire to be the best choice for DEFENSE against bears.

If all you had was a Colt Model 1873 clone in .45 Colt then according to the Hodgdon's reloading site a max load of CFE Pistol and a 250 grain, cast lead bullet would have you at the bottom end of that territory AND still be within the .45 Colt SAAMI pressure standards. But be aware that the pressures are so low that you will probably need a soft lead bullet to get good obduration and that might limit penetration. YMWV.

Other commenters then go on to make the distinction between "hunting" and "defense".