An evening on the deer stand

Oakland and Wayne Counties have another month. Too many deer. Not enough hunters. Chronic Wasting Disease.

Sometimes this blog is blessed by visitors from foreign countries like Scotland, Australia, Canada and Cleveland. I consider it my mission to share little bits of life-in-Michigan with them. 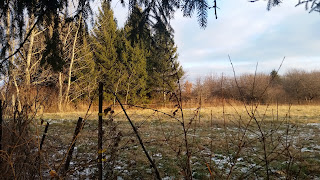 The chair faces directly south. This is the view looking east from the blue chair. As you can deduce from the shadows, the picture was taken about forty minutes before sunset. I have a very a narrow, safe shooting lane directly east. Basically, to the left of the tall fence post. 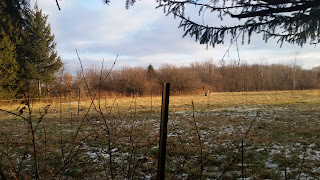 Most of this zone is no-go. There are houses a quarter mile down-range. 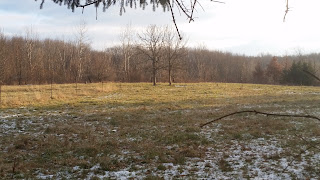 This is about 45 degrees of arc. It is my prime shooting lane. The closest dwellings are 1.2 miles downrange. It is bounded by a birdhouses mounted on fence posts to both the left and right. 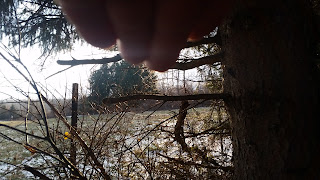 Looking west into the setting sun. Not safe to shoot.

This morning's hunt had no wind and very crunchy snow on the ground. I still got within 70 yards of a deer walking out to my blind. I walk three steps and then stop. Then I pray a Holy Mary (15 seconds). Then three more steps. The foot plant is straight-down. The sound of a deer walking is not Cruuunnnccchhhh. It is Cnch. There are many animals that crunch through the snow. Only humans trudge at a steady pace and have a long, drawn-out foot-fall.

The deer was small and not a quality shot. I passed.

I had a fox squirrel pass within five feet of me and not know I was there.

This evening's hunt was a quieter walk out. The snow was wetter.

I had a large deer pass forty yards east of me. It was "Whooshing", a sound they make when they are distressed and attempting to get a predator to announce its intentions. Oddly, it spent more time looking east into a picked bean field than my way. It may have been a buck. There were no fawns following it.

Unfortunately, it was just entering one of my no-shoot zones. I did not even pick up my weapon.

I hoped it would hop the fence and walk into the safe zone but it didn't.

I saw a flicker probing for a before-bedtime snack in the roots of a spruce tree about ten feet from where I was sitting. A female cardinal settled in for the night about three feet over head.

Countless geese flew overhead. I remember the first time a goose flew directly overhead while I was deerhunting. It was probably 1985. A single goose and it was a big deal. Now there are too many to count.

A few titmice and juncos rounded out the bird count.

I was spider webs stretching between the spruce branches and the woven-wire fence as the sun set.

It is very highly advised to unload your gun before walking back in. Otherwise, the DNR might assume you were hunting rather than walking.