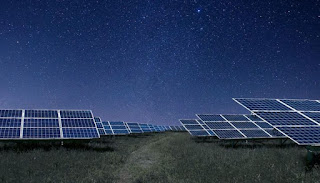 Most of the major automotive manufacturers breathlessly announced that they will have phased out "carbon based fuel" powered vehicles and completely switched over to electric/renewable vehicles by 2040.

If a very large percent of the vehicles carry workers to their jobs and those vehicles spend most of the daylight hours in the employer's parking lots, how will the battery get recharged?

Will employers be forced to install charging stations at each parking place or will every vehicle owner be required to purchase two batteries, one to drive the vehicle and one to recharge during the day?

Or perhaps people will be forced to live within five miles of their place of employment. Or maybe the only viable alternative is mass transit with buses tapping into overhead wires.

Fine. Their vehicle recharges all of the daylight hours and people become nocturnal. That will be a natural fit for a few people. Is everything going to be in Braille or will their work places have lighting? If it has lighting, where will THAT electricity come from?

Or is it just a shell-game where opinion-makers keep shuffling the cups to create the illusion that something disappeared? That huge wind-turbine: What is the embedded energy and what is the pay-back period before the turbine is a net producer of electricity? Ten years? Fifteen years? Remember that there is a YUGE block of concrete hidden from sight keeping the tower upright and concrete is made by heating limestone and clay in a kiln with FOSSIL FUELS.

All that carbon added to the atmosphere up-front in the hope that it stays operational until the break-even point.