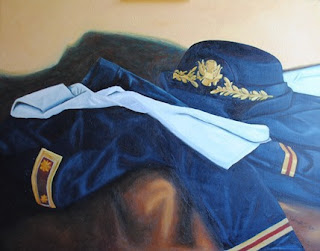 Katherine served in the Army National Guard and Army Reserves for thirty-seven years and retired at the rank of lieutenant colonel. She feels it is important to serve her nation and her contribution to the nation’s defense keeps her grounded.     -From her website

Katherine is painting a series that captures military equipment, most specifically uniforms.

A uniform is more than a random pile of clothing 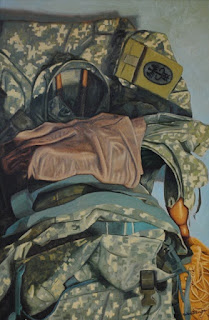 In the Biblical story of the Prodigal Son, after greeting the lost son the father commands servants to bring "the finest robe, a ring and sandals"

The "ring" was the equivalent of the power to enter into contracts and commit family resources.

The "robe" was to identify him as a son-of-the-family.

One was a mountain climber, another was a fighter pilot, the third was a farmer, the fourth a policeman. A football player, a bowler, a surgeon, a cowboy, somebody who worked in a foundry....

Would you have any difficulty sorting them out? 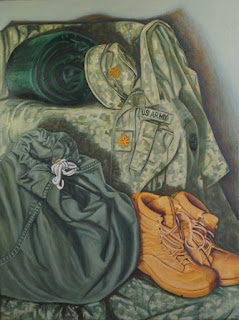 Uniform translates literally as "one shape". Those who voluntarily choose to wear a uniform trade the freedom of individual expression. The uniform suggests that they believe that there is a good that is greater than self.

The military uniform is more than an idea. It is a tangible reminder of one-for-many.

I like the calm, implied readiness in these paintings.

When I look at any image, I look for the "implied verb". The implied verb in this series of pictures is a honed readiness without being edgy. Worn boots imply been-there, done-that. Clothing with a bit of wear gives me confidence that the person wearing those clothes will not be flighty when things "get real".

These uniforms could be the uniforms of the millions of currently serving in the Armed Forces. What makes these paintings special is that they are not special or heroic in the singular sense. They represent every Soldier, Marine, Sailor, Air Force, Coast Guard, National Guard or Reservist.

Posted by Eaton Rapids Joe at 8:00 AM