I noticed bundles of wood slabs for sale along a side road while I was out-and-about.

Investigating, I found a crew of gentlemen cutting logs into lumber.

After a short conversation and handing the crew-boss an embarrassingly small amount of money, I had permission to fill my truck with sawdust to use as mulch. His crew was busy. It was up to me and my trusty scoop-shovel to do the job.

Sawdust make for every easy-to-spread mulch and if you are lucky it is available in very large quantities. The downside is that it can blow away if it is in a windy spot. Another disadvantage is that it steals nitrogen if you mix it with the soil. The key is to use it for mulch ON TOP of the soil.

Most of what the crew was milling was cottonwood and silver maple with a few other bottomland species mixed in. That sawdust should be fine. I would avoid black walnut, if possible. 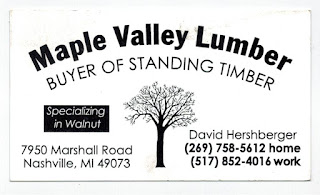 Pro-tip: Milling lumber is heavy work. The young men peeled down to short-sleeve shirts as they worked and it was 30 degrees out.

The crew-boss agreed to pull my truck out of the muck if I got stuck. I decided to get on his good side. After shaking hands on the price, I pulled a bag of candy out of my truck: Snickers bars, Werther's Caramels, chewing gum. Did I mention the crew consisted of young men.

As I was buttoning up the first load, a couple of the guys came over. I think they wanted to check out how full the truck was. One of the young men informed me that the crew preferred donuts; specifically custard-filled long-johns and maple-or-fudge-frosting covered cinnamon rolls. Good to know. The crew might as well get what they prefer.

Had I gotten stuck, I don't think the crew-boss would have left me dangling for an hour. Besides, the boss was more then willing to let me have a business card in case I need more sawdust. The crew moves from job-to-job. Next week they move to a job about fifty miles north of this one.

I ended up moving three loads of sawdust. I was dragging by the time I finished shoveling in the third load of sawdust. It doesn't look heavy but the springs were pretty well squatted down by the time it was full. I will be dragging the next few days.