Pelosi does not want a Civil War 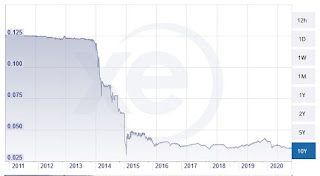 Civil Wars are expensive. Who benefits?

George Soros might want a Civil War because he makes money speculating on currency swings.

Nancy Pelosi (and Clinton and Biden) does NOT want a Civil War because most of her assets are tied up in vehicles that are based on US Dollars.

If the Ukraine conflict is a guideline, the UAH-to
-USD dropped from 0.125-to-1.0 to 0.035-to-one. Said another way, every dollar of assets denominated in Ukrainian currency (bonds, savings accounts) quickly dropped to twenty-eight cents of buying power.

The Gross Domestic Product dropped by 50% during the Civil War. It bears repeating that the area that wanted to separate from the Ukraine was about 12% of the area of the Ukraine.

Absent the convulsions of the Civil War, the GDP would most likely have been 220 instead of 153 in 2019. That is a 43% increase vis-a-vis the official GDP.

As an investor, I was interested in which "sectors" led the Ukrainian economy out of the nose-dive of 2014-2016.

Three sectors that did well were Agriculture, Heavy Machinery and...."Coding", as in computers.

Agriculture and heavy machinery are commodities and the depreciation of the UAH lowered production costs.

Computer coding can be sold internationally (for hard currency) and the variable cost of production consumes virtually no imported goods. It is doubtful that Americans could do as well. Good coders are not baffled by high school level algebra or the complexities of grammar and punctuation.

There was a fourth sector that did well in the post-Civil War period. Four percent of the working age population left the Ukraine for brighter prospects. They have little intention of returning but do send money back home.

While Pelosi does not want a Civil War...

The younger Marxists probably do. They see the immolation of Wealth as a feature, not a bug.